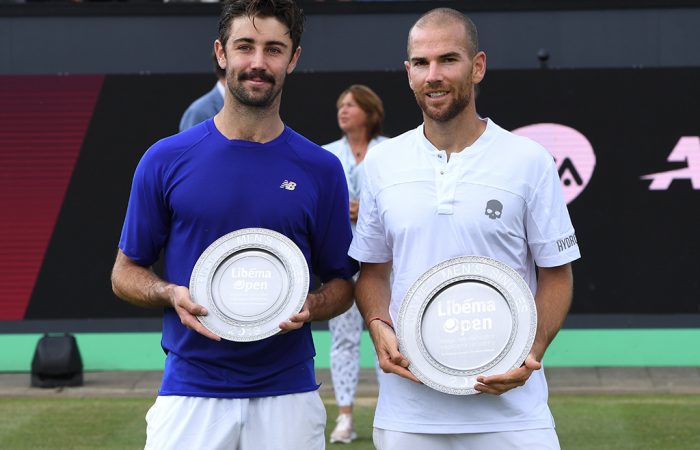 Jordan Thompson put in a fighting performance but ultimately went down in his first ATP final to Adrian Mannarino in ‘s-Hertogenbosch.

Thompson held four set points in the opening set of the final at the Dutch grass-court event, but ended up falling to the Frenchman 7-6(7) 6-3.

This was Mannarino’s first ATP title in seven finals appearances; he collapsed to the grass in elation when Thompson’s final shot drifted long.

“Thanks to everyone for coming out and supporting this week – the players really appreciate it,” Thompson said during the on-court trophy ceremony.

“I’m going to forget a lot of people but I don’t want to forget anyone, so I’m going to say thank you everyone, and especially to Lleyton (Hewitt) over there, and Ivan (Gutierrez) – thanks for being with me for this week.”

Thompson and Mannarino had earlier on Sunday been forced to complete their semifinal matches.

The Australian was leading Richard Gasquet 7-5 5-3 and needed to play only one game to seal victory and progress to his first ever ATP tour final. Mannarino ended up beating Borna Coric in a final-set tiebreak.

The two men returned to the court after the women’s final and Mannarino went ahead 3-1, only for Thompson to reel him in.

Thomson was unable to convert his first set point in the 12th game when he narrowly missed a forehand wide of the sideline, and in the tiebreak he led 6-4, yet Mannarino remained alive.

Understandably frustrated, Thompson did well to re-focus in the early stages of the third set and held two break points in the third game, yet when Mannarino eventually held and then broke Thompson to lead 3-1, the Frenchman had undeniable momentum.

Come Monday, Thompson is projected to rise to a new career-high ranking of No.46, making him the third-ranked Australian behind Alex de Minaur – whom he beat in the ‘s-Hertogenbosch quarterfinals – and Nick Kyrgios.