Chris O'Connell has overcome a 0-6 start to take the Cairns Pro Tour title over Blake Mott. 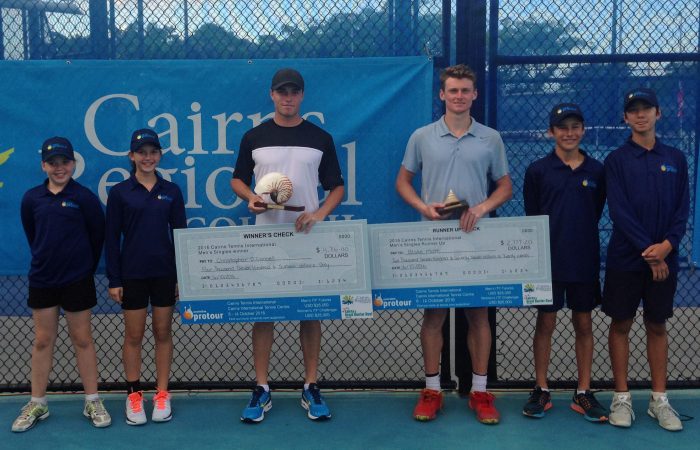 After dropping the opening set without winning a game, the third seed righted the ship to eventually claim victory 0-6 6-2 6-4 in just under two hours.

“Blake came out all guns blazing and I really didn’t know what hit me,” O’Connell, a previous Cairns semifinalist, said.

“Everything was going a million miles an hour and before I knew it, the first set was over.

“I really had to regroup and think about what I needed to change up, but I seemed to turn it around quite quickly.

“It was quite a strange match, very up and down, but I thought I had the better of the second set and then the third set was anyone’s game again.

“I was lucky enough to get through it in the end.”

The pair last met in a February Pro Tour final in Port Pirie, with O’Connell also taking the honours then in three tight sets.

Mott had just enjoyed a break-out ATP Challenger win in Launceston, but since then O’Connell has had some success of his own, reaching a semifinal at the same level in Sibiu, Romania, just last month.

“I really found some form towards the end of my Europe trip,” he said. “I got my ranking up high enough to start having a go in the Challengers and did well there. I was feeling really good after that.”

O’Connell, 22, only arrived back last week, bringing home with him a place in the world’s top 300 and some newfound confidence.

“I feel a lot more comfortable in tighter situations and I’m able to play at a consistent high level more often now,” he said.

“I’m really looking forward to the two Challengers in Traralgon and Canberra and the run of tournaments in January, especially the Australian Open.”