Bernie Tomic overcame a tough challenge from Denis Istomin to move on at the Australian Open. 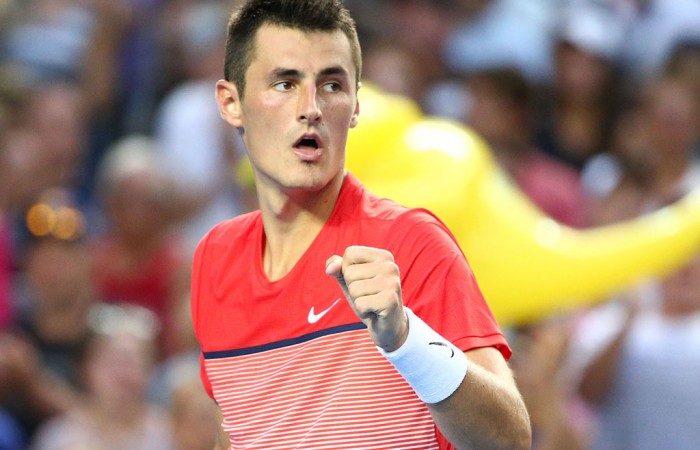 Bernard Tomic downed Denis Istomin to reach the second round of the Australian Open.

The match was interrupted for more than 20 minutes early in the fourth set because of a spectator’s medical condition.

The top-ranked local hope next faces Simone Bolelli or Brian Baker – meaning he will be expected to advance to the third round with minimal fuss.

Tomic is seeded 16th – never before has he earned such a great chance to progress to an elusive Open quarter-final.

But any thoughts the 23-year-old had of steamrolling Istomin were extinguished in the opening set, when he saved three break points to push it to a tiebreaker.

“He was playing so well in that first set … he was serving so well,” Tomic said courtside after the win.

“I’ve played Denis many times. Last time he beat me so I knew it was going to be difficult.

“I’m happy with the way I started.”

The Uzbek won the opening four points of the breaker, taking the first set with one of his 23 aces.

Tomic twice broke the world No.59’s serve in the second set but it was in the third that he showed particularly impressive poise.

Tomic saved five break points at 5-4, battling back from 0-40 to serve out the third set and put a major dent in Istomin’s hopes of a comeback.

Tomic broke for a 2-1 lead in the deciding set, only for Istomin to immediately square the ledger.

Istomin continued to press, forcing Tomic to save two break points when a fifth set looked like a genuine possibility.

Tomic, who insisted he pulled out of last week’s Sydney International because he was sick, regained the ascendancy and avoided another tiebreaker.

“I’m moving probably the best I’ve been moving in my career. So I’m really pleased everything is going well,” he said.