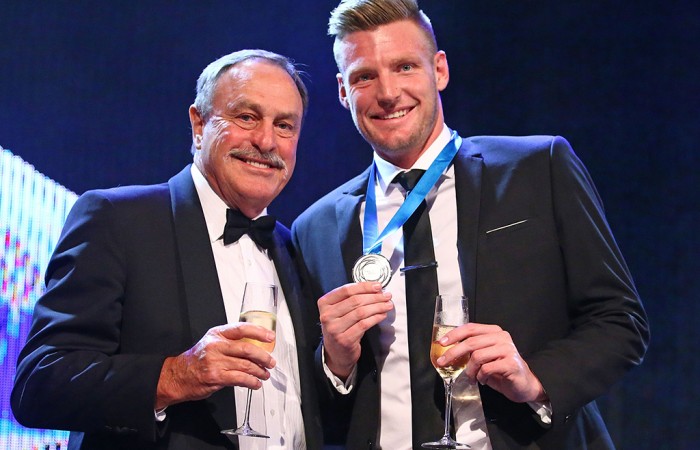 The world No.60 was bestowed the honour at a gala celebration at Crown Palladium in Melbourne, attended by a who’s who of Australian tennis. Groth accepted the Newcombe Medal from the award’s namesake, Australian tennis legend John Newcombe.

“It’s hard to put it into words, it was a great year and this really tops it off. For the whole Australian tennis community to come together and to be presented with this award, I’m a little bit speechless,” Groth said.

“I’m really appreciative that everyone’s seen my year to be good enough to be nominated – let alone, to win – the Newcombe Medal, so it’s a pretty amazing feeling.”

Following a night of celebration it will be business as usual for the newly crowned medallist, who has his sights set on a big year in 2016.

“I’ll get ready for the summer now, I don’t think my plans will really change too much but it’s a nice honour to have,” Groth said.

“Top 50 is the goal, I got within one win this season when I had to stop playing due to injury. I want to try to push into the second week of the Slams and I think now with Davis Cup we have a good young team, a really talented team, so I’m going to place a big focus on Davis Cup next year and also make sure I qualify for Rio.”

The 28-year-old was tonight honoured to be recognised for his outstanding season in front of the nation’s top past and current players.

“These names are so well respected in the Australian tennis community and that’s something I want to develop over time,” he said.

“I want to have the respect of the old guys, the current players and also the young guys, and that’s something I try to do every day, I go out on court and give it everything I’ve got. I feel like if I keep doing what I’m doing hopefully one day I’ll be held in the same regard.”

On court in 2015 Groth won Challenger titles in Taiwan and Manchester, and made his maiden appearance in the final 32 at a Grand Slam when he advanced to the third round of the Australian Open in January.

The big-serving Victorian was a pivotal member of Australia’s Davis Cup team, helping steer the nation to the World Group semifinals in September.

After starting the year ranked world No.81, Groth’s strong results – including three ATP quarterfinals – saw him rise to a career-high world No.53 in August.

A highlight of the evening’s celebrations was the presentation of the President’s Spirit of Tennis Award to Ray Ruffels (Vic) for his outstanding contribution to the sport. Also honoured was former world No.1 and two-time Grand Slam champion Lleyton Hewitt (SA), who will retire from professional tennis following Australian Open 2016.