Alex Bolt and Olivia Tjandramulia enjoyed strong weeks on home soil at the Cairns Pro Tour event but were stopped in the final by a pair of international talents. 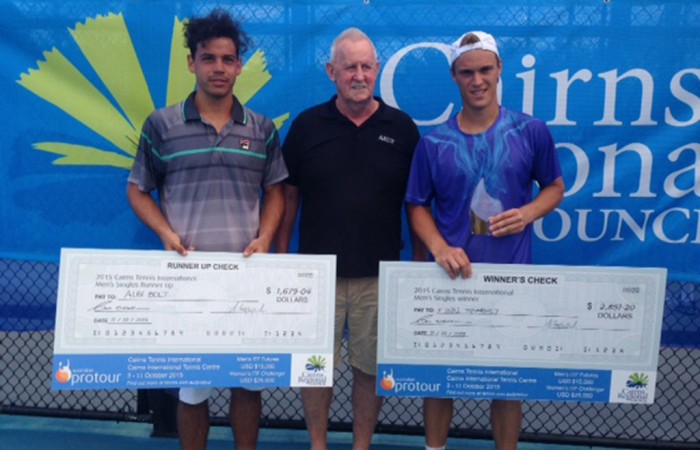 “It was just a few points here and there,” Tearney said. “It’s great to get the win. I really wanted to do well here.”

Despite dropping the first set in a tiebreaker, the 25 year-old, seeded sixth in Cairns, regained his composure to manufacture two breaks of serve in each of the final sets to run out a 6-7(5) 6-3 6-3 winner.

The momentum noticeably shifted in favour of the Kiwi after a rain delay at 4-3 in the second set. He seemed better able to stay with the powerful Bolt serve and hold firm at key moments, saving a miraculous 11 of 12 break points and, in contrast to Bolt, take advantage of any opportunity that was presented to him.

“The rain delay definitely helped me refocus a bit,” he said. “I got my mind right and managed to come back.”

Tearney is on the rise this year, returning to tennis after shoulder surgery; the title win will see him reach a projected career-high ranking just outside the world’s top 400.

He also partnered Japan’s Yusuke Watanuki to reach the doubles final on Saturday but they were unable to stop the top seeded Chinese pair of Gao Zin and Li Zhe from securing their second consecutive doubles title after last week’s victory in Alice Springs.

Despite the loss, the Rockhampton teenager enjoyed a terrific week in her home state; after qualifying for the main draw she defeated Tweed Heads finalist Storm Sanders and sixth seed Jessica Moore en route to the final.

Moore and Sanders had some success of their own however, pairing up to capture the doubles title after defeating Americans Jennifer Elie and Asia Muhammad.

The singles final was an enthralling affair with Tjandramulia winning an epic tiebreak to take the second set and level proceedings at a set apiece before eventually capitulating to the Hungarian’s superior weaponry.

The win makes it two titles in a row for Galfi, who also held the trophy aloft last week in Tweed Heads. The 17-year-old was unseeded in both events and is clearly one to keep an eye on in the future.