Two emerging tennis players have won the WTA Future Stars national final and are headed to Singapore in October. 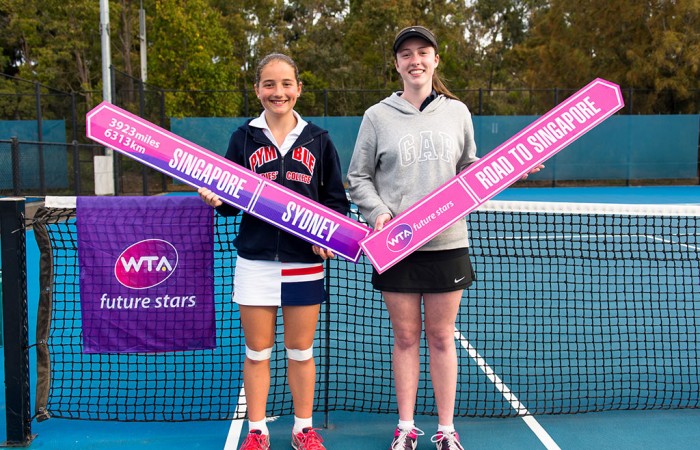 Twelve of Australia’s rising female tennis players went head to head at Sydney Olympic Park today for their place in the prestigious event. The tournament was played using the FAST4 rules: play lets, no ad scoring, tiebreaker at three games all and first to four games wins.

“I was really nervous but I knew I had to keep my cool and just play some great tennis. I tried to stay really positive throughout the match and it worked,” Burton said.

“I can’t wait for this amazing experience in Singapore. It will improve my tennis and I will get to see the top players up close. I want to ask them how many hours they train a day and get some tips to improve my game.

“The WTA Future Stars program has been absolutely amazing. Everything ran smoothly and it was great to get to know the other girls on a personal level, everyone felt really welcome,” continued Burton.

The 14/U final was a battle of the Sydney-siders with Chiara di Tommaso (Pymble Ladies’ College) defeating Julia Varvarigos (Meriden) 4-2.

“The match was tough. We’ve played each other a few times and it’s always hard so it was good I got the win this time,” di Tommaso said.

“I think the WTA Future Stars program is a fantastic experience for girls my age and I can’t wait to go to Singapore. I want to ask the WTA players about the best advice they were given when they were starting out.”

Qualifying events were held in New South Wales, Victoria and Queensland throughout August, with the winner and runner-up from each event progressing to today’s national final.

The WTA Future Stars Singapore final will be held in conjunction with the BNP Paribas WTA Finals Singapore presented by SC Global, which will feature the top eight WTA singles players, and top eight doubles teams. World No.1 Serena Williams is the first player to qualify for the event in October.

As well as having the opportunity to play on centre court at the Singapore Indoor Stadium, the winners will join top players such as Williams at the WTA Finals Draw Ceremony and mingle with WTA legends of the game.

Launched in 2014 with 12 countries from across the Asia-Pacific taking part, this year’s WTA Future Stars invitations were extended to an increased number of countries, including Australia. The WTA Future Stars program is designed to inspire and develop the next generation of tennis professionals by providing opportunities within the sport for young girls.