Czech Robin Stanek has taken out his second Australian Pro Tour title this month after victory on the weekend at the Hutchinson Builders Toowoomba International. 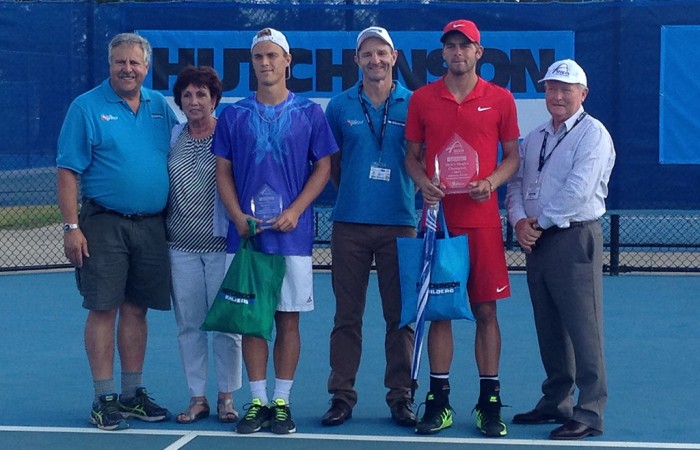 Czech Robin Stanek has walked away with the second ITF Futures title of his career after winning the 2015 Hutchinson Builders Toowoomba International.

On Sunday, he scored a 6-2 6-2 win over New Zealand third seed Finn Tearney.

“It’s an amazing feeling,” the 20-year-old fifth seed said. “I struggled in the first and second rounds here but today I played my best tennis.”

After each defeated Australians in their respective semifinals – Stanek was too strong for Victoria’s Dayne Kelly while Tearney overcame Bradley Mousley – it became a battle of the two in-form players on the Australian Pro Tour with Stanek successful in Alice Springs earlier this month and Tearney having taken the honours in Cairns last week, entering the final on a nine-match winning streak.

However, it was a comfortable win for the left-handed Stanek as he took advantage of the windy conditions to secure the victory in just 64 minutes.

“I thought I played pretty smart,” he said of his game. “I served really well and was able to win the important points.”

Stanek was impenetrable on serve throughout the match and won nearly 30 percent more points on his first serve than his opponent.

Both players will achieve new career-highs as a result of their efforts in Toowoomba with Stanek closing in on the top 400 and Tearney breaking that barrier for the first time.

With the players removing the top two seeds in their semifinal affairs – Eguchi defeated Dutch second seed Cindy Burger in straight sets while Celik needed three sets to take care of top seed Eri Hozumi – the final always looked as though it was going down to the wire.

Celik gave up four break point opportunities in the first set but was unable to convert, sending it into an entertaining tiebreaker in which Eguchi eventually got the edge.

Both players struggled to hold serve in the second set but in the end it was again the Japanese fourth seed coming out on top.

The win made it a clean sweep for Eguchi in Toowoomba after she and partner Hozumi earlier took the doubles title.