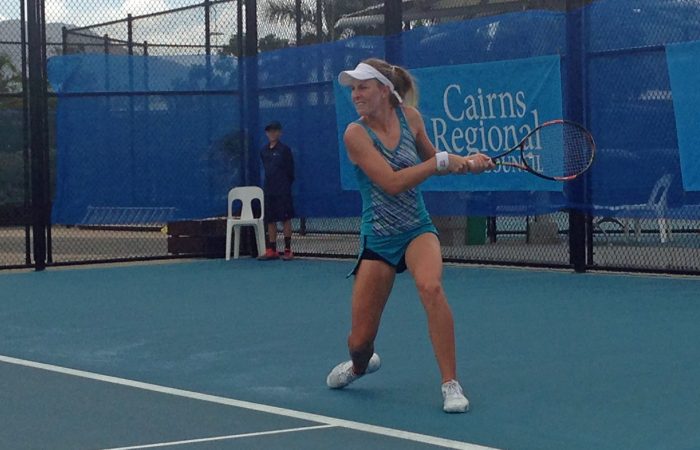 Olivia Rogowska has claimed the ITF $25,000 Cairns Tennis International title with a 6-1 7-5 victory over Slovakian Viktoria Kuzmova on Sunday.

“It definitely feels good to break the drought,” said the unseeded 25-year-old from Melbourne, who last tasted success over two years ago at an ITF event in Sacramento, California.

“Last year was really hard for me, I nearly gave the game up so it’s great to come here and win.”

With rain washing away play in her semifinal against Papua New Guinean qualifier Abigail Tere-Apisah on Saturday, Rogowska was required to complete that match before backing up against sixth-seeded Kuzmova in the final.

“It was mentally tough to recover straight away. As soon as I won the semi, I had to start focusing on the final and I handled that really well,” she said.

“I’ve been in this position a couple of times in the past so I had definitely learned from experience. I actually played really well in the final so maybe I should do it more often (laughter).”

Rogowska has been pressing hard in recent Pro Tour events but until this week had been unable to string enough quality matches together to be in contention on the final day.

“I’ve been playing some really good tennis in the last couple of months. Even in practice I definitely notice that my level has improved so I knew a result wasn’t too far off,” she said.

“This week I just decided that I was going to be super tough and be really positive and just fight for every point and it paid off.”

Most notable in Cairns this week was Rogowska’s quarterfinal win over Lizette Cabrera. After taking titles in Tweed Heads and Brisbane, the Queensland teen came into that encounter on a 12-match winning streak which included a defeat of Rogowska.

“We definitely have a little bit of a rivalry,” Rogowska said.

“She’s been playing some really good tennis and I knew it was going to be a tough match. When I beat her I definitely took a lot of confidence from it.

“I’m not looking too far ahead though, just one week at a time, but hopefully I will continue this form in the $50,000 events in Bendigo and Canberra.”

Rogowska, who reached a career high world No.102 in the latter half of 2014, admits her current season has been patchy. “That’s probably the key word. Some days I play really well and some days are just not up to standard. But I’ve kept going out on court and working really hard,” she said.

“Definitely my attitude has improved lately. I’m much more positive and starting to believe in myself a bit more than I did at the start of the year. It makes a big difference.”

Earlier in the week, unseeded duo Cabrera and Alison Bai took the doubles title in a thriller over Polish pair Katarzyna Kawa and Sandra Zaniewska 7-5 5-7 [12-10].