Tammi Patterson is on a roll at the Cairns Tennis International. 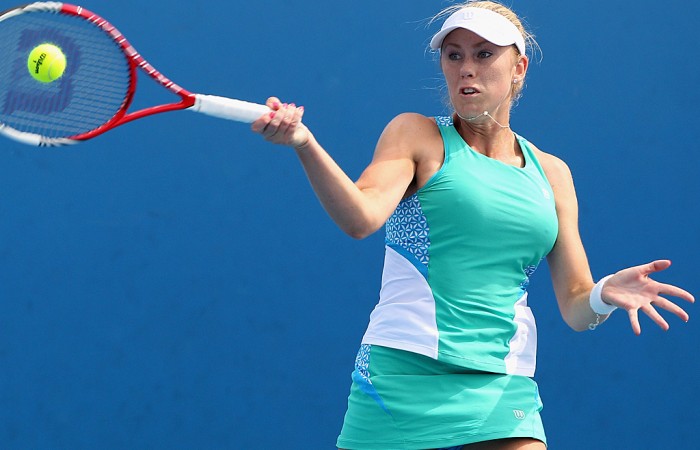 Twenty-five-year-old qualifier Tammi Patterson has continued her progression at the 2015 Cairns Tennis International after bundling out the ACT’s Alison Bai 6-2 6-2 on Thursday to reach the quarterfinals.

“It’s a pleasant surprise,” Patterson said of her recent form. “I was just hoping to get a few matches under my belt to be honest.”

She has already done significantly more than that, proving earlier in the week that lightning can strike twice when she came from a set down to oust top seed Eri Hozumi – currently ranked more than 1000 places above her – in the first round.

The win made it two from two over top seeds in as many weeks for the Sydneysider, after she found herself in the exact same position in Tweed Heads last week – qualifying, and then drawing the top seed in the opening round.

“What are the chances, huh?” Patterson laughed.

“Actually, when I saw there was a qualification spot open to play the top seed again this week, I thought, ‘you know what? I’m going to play her. I’ve got this feeling it’s going to be me,’” she said.

“But I like a challenge and what better challenge than playing the No.1 seed.”

On the first occasion, her prey was Jessica Moore, and Patterson – who was ranked as high as world No.289 before injury and time away from the game – went on to reach the quarterfinals after a win over Queenslander Kimberly Birrell in the following round.

In Cairns, she will now face Birrell once again, after the teenager impressed in her 6-2 7-5 victory over Swedish eighth seed Susanne Celik.

Patterson will take some confidence into the match after her earlier win but said she would not be taking Birrell lightly.

“Each day is a different day and she’s a tough competitor,” she said.

Another qualifier, 18-year-old Olivia Tjandramulia, has also enjoyed a terrific run in Cairns, the Queensland local toppling Tweed Heads runner-up Storm Sanders in the first round and backing that up with a straight sets victory over the sixth-seeded Moore. She must overcome another qualifier in American Jennifer Elie to book a semifinal spot.

In the men’s event, the top seven seeds all progressed relatively uneventfully to the quarterfinals, with the unseeded Akira Santillan of Japan proving the fly in the ointment for perfectionists after dispatching eighth-seed Jacob Grills in three sets.

Santillan now faces China’s Li Zhe, who continues to display the fine form that took him to the final last week in Alice Springs, despite dropping a set to qualifier Mitchell William Robins on Thursday.

After a string of solid results this year, 23-year-old Gavin van Peperzeel from Queensland, the fourth seed, is currently close to his career-high ranking of 295. He defeated good mate Scott Puodziunas in the second round.

“Playing a friend adds a little bit of pressure but I thought I handled it well today,” van Peperzeel said.

He next plays Chris O’Connell, who enjoyed a 7-5 6-2 victory over Robin Stanek, the recent Alice Springs titlist. Van Peperzeel said that O’Connell presented as a dangerous opponent.

“I’m going to have to mix things up and give him something different,” he said.