Alex de Minaur, Thanasi Kokkinakis and Nick Kyrgios have been rewarded for their Atlanta Open title-winning runs in the latest ATP Tour rankings. 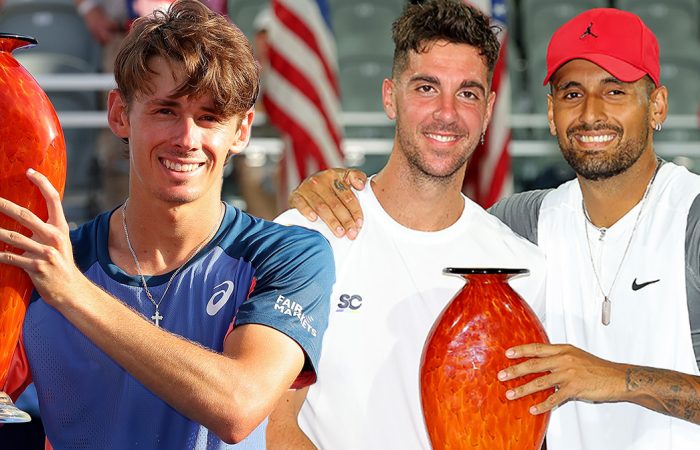 Alex de Minaur is verging on a top-20 return in the latest ATP Tour men’s singles rankings. The 23-year-old rises nine places this week to world No.21 after capturing his sixth career ATP singles title in Atlanta.

Li Tu improves 16 places to a career-high world No.252 after reaching the quarterfinals at an ATP Challenger event in Canada.

While Dane Sweeny, who finished runner-up to Fancutt at Caloundra, jumps up 14 places to a career-high world No.361.

Kimberly Birrell is the biggest mover in the latest WTA Tour women’s singles rankings. The 24-year-old improves 62 places to world No.345 following a recent runner-up finish at an ITF tournament in Portugal. It was Birrell’s first ITF finals appearance in almost four years.

Talia Gibson has been rewarded for her title-winning run at an ITF tournament in Caloundra, with the 18-year-old climbing 45 spots to a career-high world No.601.

Priscilla Hon, currently ranked No.196, is set to soon rise higher too after winning her sixth career ITF title – and second this season – at a tournament in Nottingham last week.

Thanasi Kokkinakis and Nick Kyrgios are at new career-highs in the latest ATP Tour doubles rankings.

The Special K’s have been rewarded for their title-winning run at Atlanta, with Kokkinakis rising three places to world No.24 and Kyrgios up two spots to world No.27.

Jason Kubler is the biggest mover of the week, skyrocketing up 144 places to world No.212 after advancing to his first tour-level final. Kubler finished runner-up in Atlanta alongside compatriot John Peers in the first all-Australian doubles final played at an ATP tournament in 22 years.

For the second consecutive week, Alexandra Bozovic is the biggest mover in the latest WTA doubles rankings. The 23-year-old jumps up 79 places to world No.376 following a title-winning run at an ITF tournament in Portugal.

Bozovic has won seven of her past nine matches and improved her ranking 115 places in the past month.