Australian players are excited to start their seasons in Adelaide, where stars including John Millman and Ash Barty have already experienced career highs. 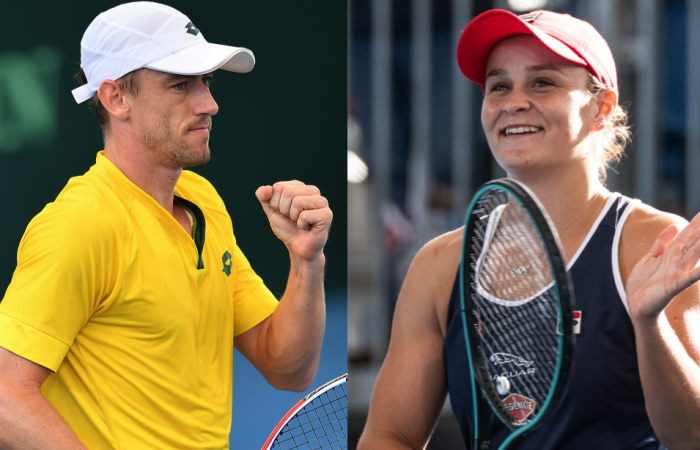 A string of Australian stars will descend on Adelaide over the next two weeks, with many of them bringing fond memories back to the city of churches.

World No.1 Ash Barty is excited to return to Memorial Drive, where she lifted the trophy in 2020 with a straight-sets win over Ukraine’s Darya Yastremska in the final.

The title was Barty’s first WTA title on home soil, and helped launch her semifinal run at Australian Open 2020.

The former Roland Garros and current Wimbledon champion, who is the top seed in Adelaide, will automatically progress to the second round courtesy of an opening-round bye.

Are you ready? 💪 Welcome to 2022 and the Adelaide International 🌟#AdelaideTennis pic.twitter.com/xIocCZfnIg

Ajla Tomljanovic also begins her 2022 campaign in Adelaide, fresh from a career-best season in which she won matches at all four majors, and made a quarterfinal run at Wimbledon.

The World No.45 takes on veteran Brit Heather Watson in her first-round clash this year.

Storm Sanders was another Australian who enjoyed a positive 2021 season, which was largely sparked off the back of a terrific run to the Adelaide quarterfinals.

Sanders defeated Tomljanovic and world No. 42 Yulina Putintseva, before exiting to Swiss star Belinda Bencic. She faces a tricky first-up match against world No.14 Elena Rybakin, from Kazakhstan, this year.

Priscilla Hon began her 2020 season in Adelaide, before winning her first-ever match at the Australian Open. Hon returns to Adelaide aiming to kickstart a big year in her development.

Adelaide will simultaneously host an ATP 250 event in the first week of January, with plenty of Aussies making final preparations there ahead of the Australian Open.

Veteran John Millman returns to the scene of his 2020 Davis Cup heroics when he takes to the court in Adelaide.

In March 2020, Millman entered Australian Davis Cup folklore when he came from a set down twice in two days to launch his country into the finals with victory over Brazil.

Millman, like many, relishes his return to Australia after a gruelling 2021 campaign. Memories of Adelaide provide an extra shot of confidence for the popular Australian.

“It’s always great to kick things off in Australia,” said the 32-year-old Queenslander. “I have really good memories of Adelaide. Last time we were here, managed to play a couple of Davis Cup ties, which was awesome.”

Millman faces a tough first-round assignment in hometown star Thanasi Kokkinakis, a wildcard entrant into the Adelaide International in 2022.

“He plays really well in Australia. We know when he’s on his game, when his body is good, mentally and physically he’s fit, he can play really a high level of tennis,” Millman said.

While the Adelaide-born Kokkinakis hasn’t competed since October, Millman pointed to the South Australian’s solid Australian Open 2021 run – when he defeated Soonwoo Kwon, before losing to Greek star Stefanos Tsitsipas in a four- and half-hour five-set marathon – as testament of his ability to thrive at home.

“We saw how well he went at the Australian Open last year, really taking it to Tsitsipas, one of the best players in the game currently,” said Millman.

“I think it’s a tough test against Thanasi. The first match of the year is always a little bit tricky. You’re always trying to find that sharpness, find your game. Hopefully Ican find my feet as early as possible in that one.”

Alex Bolt is another player with happy memories of Adelaide, with a maiden ATP quarterfinal appearance recorded at this event in 2020. His run included victory over talented German Jan-Lennard Struff.

Bolt made his Davis Cup debut at Memorial Drive a few weeks later, in the same tie where Millman starred.

In Adelaide this week, Bolt takes on rising Argentine Juan Manuel Cerundolo in the first round.

Aleksandar Vukic will also start his 2022 season in Adelaide, taking on veteran American Steve Johnson in the opening round.

James Duckworth was another who ventured to Adelaide in 2020, reaching the second round with a victory over Federico Delbonis of Argentina.

Duckworth will return to Adelaide for the second ATP event, after representing Australia at the ATP Cup this week.

Having boosted his ranking inside the top 50 for the first time in 2021, he’ll be confident as begins season 2022.