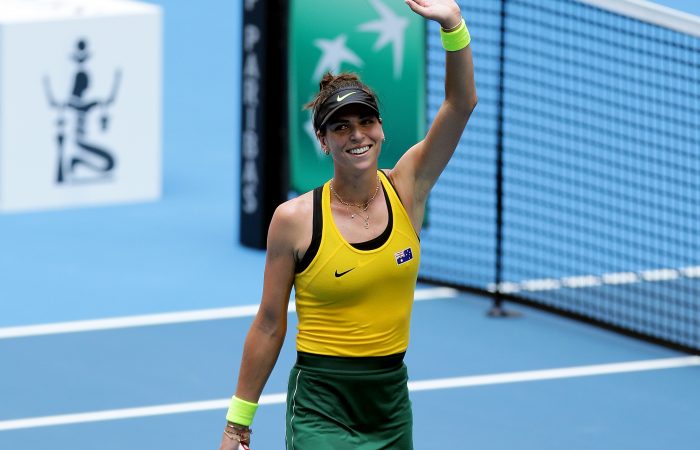 World No.47 Ajla Tomljanovic will lead West Australians Astra Sharma and Storm Sanders, alongside debutants Ellen Perez and 19-year-old Olivia Gadecki, from 1-6 November at the 02 Arena in Prague, Czech Republic.

“We are thrilled to be back representing Australia in the Billie Jean King Cup,” said Molik.

“It was a tremendous effort to reach the final in the last Fed Cup held in 2019 and we can’t wait to get back out there as a team to compete for Australia against the world’s best nations.

“Ajla has had an incredible year and this is a great opportunity for her to lead the team. Storm and Astra are both tremendous team players and it’s exciting to welcome Ellen and Olivia to the team for the first time.

“Representing your country is a huge honour and always brings out the best in our team. It was an incredible effort to reach the final of the Fed Cup in 2019, and I’m expecting the team to bring the same grit to do our country proud in Prague.”

Tomljanovic recorded eight singles wins in a career-best Grand Slam season in 2021, reaching the Wimbledon quarterfinals and US Open third round, and made the second round in her Olympic Games debut. In November 2019, Tomljanovic played a key role in the Fed Cup final in 2019, notching her first win for the country.

Sharma won her first WTA singles title in Charleston in April and her second WTA doubles title in Guadalajara, partnering Ellen Perez. Sharma was twice named in the Fed Cup team in 2019.

Sanders has also had a stellar year, achieving a career-high singles ranking of No.123 in September and is currently at a career-high No.32 in doubles. Sanders has scored five top-100 singles wins in 2021, and made the women’s doubles quarterfinals in her Olympic debut with Ash Barty, and two Grand Slam doubles semifinals in a breakout season.

As an unranked wildcard at the Melbourne Summer Series in February, Gadecki kick-started a stellar season with a victory against world No.4 Sofia Kenin. The up-and-comer from the Gold Coast has since claimed two ITF singles and five ITF doubles titles in 2021, to secure a position in Australia’s top-10 women in both singles and doubles.

Perez is currently ranked world No.44 in doubles and has reached three WTA doubles finals this season. She won the Guadalajara title alongside Sharma and made the doubles quarterfinals with Sam Stosur in her Olympic debut. She also qualified for this year’s Wimbledon singles main draw.

Australia has been named in Group B alongside Belarus and Belgium. The event format is round-robin, with group winners to face-off in the semifinals. Each tie consists of two singles and one doubles match.

The semifinals will be played on Friday 5 November, with the final on Saturday 6 November.

The draw for the Billie Jean King Cup Finals knock-out stage is as follows:

The finals were originally scheduled to take place in Budapest, Hungary in April 2020. They were postponed twice during the pandemic, before Prague was announced as the new host city.