Six Australians, led by world No.114 Astra Sharma, will compete in the US Open 2021 women's singles qualifying competition. 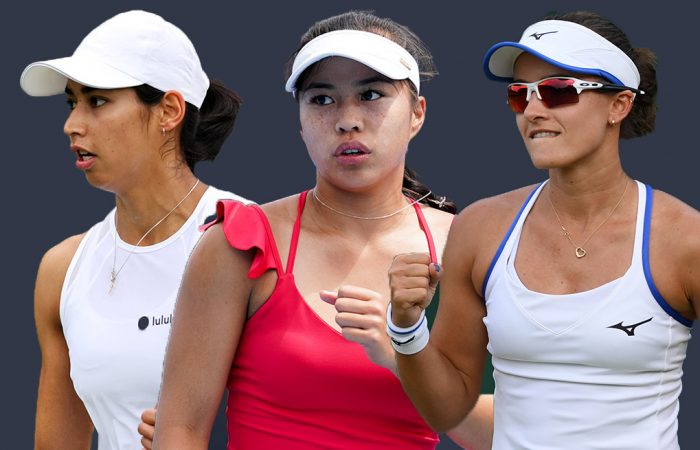 Qualifying for the final Grand Slam tournament of the season is about to begin and we have six Australian hopes in the women’s singles qualifying draw.

To earn a US Open main draw place, these players need to win three qualifying matches. If they do, they will join fellow Australians Ash Barty, Ajla Tomljanovic, 2011 champion Sam Stosur and wildcard Storm Sanders in the main draw.

[10] Astra Sharma, 25, Western Australia
This is the first time that the world No.114 has contested qualifying in New York, having gained direct acceptance in her two previous US Open main draw appearances in 2019 and 2020. The athletic Sharma has, however, qualified once before at a Grand Slam tournament and recently made the final qualifying round at Wimbledon. She also carries confidence from reaching three tour-level quarterfinals this season, including a maiden WTA title-winning run at Charleston in April. The Perth athlete, who has an American base in Nashville where she spent several years playing college tennis, faces 23-year-old Slovakian and former world No.43 Viktoria Kuzmova in the opening round. It is her first career meeting with the world No.158.
US Open career record: 0-2 (0-0 in qualifying)
US Open best result: First round 2019, 2020

[28] Maddison Inglis, 23, Western Australia
Inglis scored her first tour-level main draw win during the Melbourne Summer Series in February – and has since scored three more, proving she can match it with the world’s best. The world No.144 also demonstrated that during her US Open main draw debut last year, when she pushed No.24 seed Magda Linette to three sets. Inglis returns to New York this year aiming to qualify at a major tournament for the first time. She has made the second round in her past three Grand Slam qualifying appearances, but is yet to progress any further. The No.28 seed faces a tricky first-round encounter with 33-year-old Romanian Monica Niculescu, a former top-30 player currently ranked No.216. They have never previously played.
US Open career record: 0-1 (1-1 in qualifying)
US Open best result: First round 2020

Arina Rodionova, 31, Victoria
This is Rodionova’s ninth attempt to qualify at the US Open. The supremely-fit athlete proved the value in perseverance earlier this season, advancing to the biggest singles final of her career at an ITF grass-court tournament in Nottingham. The world No.157 has previously qualified at a Grand Slam tournament three times in her career – once at the Australian Open and twice at Wimbledon. Rodionova’s best US Open qualifying effort is reaching the final round in 2010. She has made two main draw appearances in New York in her career, with the highlight making the second round as a wildcard in 2017. Her opening round is against first-time opponent Rebecca Sramkova, a 24-year-old Slovakian ranked No.187.
US Open career record: 1-2 (6-8 in qualifying)
US Open best result: Second round 2017

Lizette Cabrera, 23, Queensland
Cabrera is making her third appearance in a US Open qualifying draw and hoping to better a final round effort in 2019. That is the world No.159’s career-best result from nine Grand Slam qualifying attempts. Can she qualify at a major tournament for the first time in attempt number 10? The hard-working Cabrera has been struggling lately, recording three wins from 12 matches since June. However, the Townsville talent can take confidence from an impressive record in New York, where she has twice defeated seeded opponents in US Open qualifying matches. Cabrera has been pitted against a seeded player again, drawing rising 19-year-old Russian and No.20 seed Kamilla Rakhimova in the opening round. It is her first meeting with the world No.133.
US Open career record: 0-2 (3-2 in qualifying)
US Open best result: First round 2018, 2020

Ellen Perez, 25, New South Wales
Perez has reached three tour-level doubles finals this season and established her place inside the world’s top 50. The left-hander has also posted some impressive singles results, qualifying at Wimbledon and advancing to the final qualifying round at Roland Garros. Presently ranked No.219 in singles, Perez is hoping to improve on this with more wins in New York. This is her second US Open qualifying appearance, having previously made the second round in 2019. Perez, who played US college tennis before turning professional, made her only main draw appearance as a wildcard in 2016. She faces former world No.23 Lesia Tsurenko in the first round. The 32-year-old Ukrainain, who is currently ranked No.180, was a US Open quarterfinalist in 2018.
US Open career record: 0-1 (1-1 in qualifying)
US Open best result: First round 2016

Jaimee Fourlis, 21, Victoria
Fourlis has twice got close to qualifying at the US Open, reaching the final round in both 2018 and 2019. She missed last year’s tournament due to a shoulder injury and is using a protected ranking of No.251 to compete in New York this year. The world No.371 is trying to rebuild her ranking after more than a year off the tour and has been making promising progress at ITF level, winning her first title in more than three years in Spain last week. Fourlis, who reached the Australian Open 2017 second round as a 17-year-old wildcard, achieved a career-high ranking of No.189 in September 2018. Her first-round opponent is world No.205 Usue Maitane Arconada, a 22-year-old American who won their only previous meeting in 2019.
US Open career record: 0-0 (4-2 in qualifying)
US Open best result: Final qualifying round 2018, 2019

World No.183 Priscilla Hon was also slated to compete, however the 23-year-old Australian has withdrawn due to a hip injury.