Australian No.1 Alex de Minaur will spearhead our national team at next month's Davis Cup Finals in Italy. 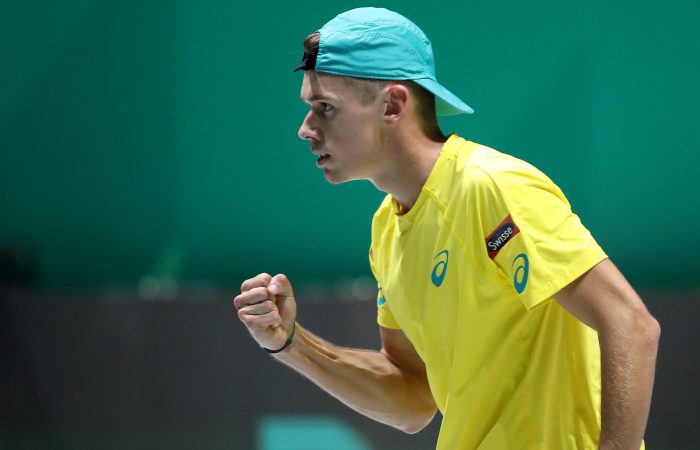 Australian Davis Cup captain Lleyton Hewitt has named his side to compete at the Davis Cup by Rakuten Finals, set to take place from 25 November to 5 December.

Hewitt said after a long year on the road, the Aussies are looking forward to coming together as a team and representing the nation at the highest level.

“It’s going to be really exciting to be back with the boys again at the Davis Cup Finals,” Hewitt said.

“Team selection is never easy. We will be led by our number one Alex de Minaur, who has had a really consistent three to four years on the tour and has established himself as a top player.

“John Millman gave us the opportunity to play in these Davis Cup Finals a year and a half ago in Adelaide against Brazil. He bleeds green and gold and loves representing Australia.

“Jordan Thompson has played some big matches in Davis Cup in the past. He had a great doubles win with John Peers beating Columbia two years ago. He and Peersy know how to play well together if they get the opportunity to play in one of our crucial doubles matches.

“Alexei Popyrin plays his best tennis in the biggest matches and the biggest tournaments. He has a lot of firepower and a lot of weapons and it’s nice to have another young gun in the team.

“And John Peers has been a consistent performer in our Davis Cup team for a number of years. We know what we get with Peersy, he’s had a big win at Indian Wells recently and we’re excited to see him bring this form to the Davis Cup Finals.”

Hewitt said his team will come together early to prepare, like they usually do for a Davis Cup tie.

“Our main focus in on Turin and trying to get through our Group Stage to give ourselves the opportunity again to go through to the knockout quarterfinals,” he said.

“A big focus is on Croatia, our first match followed by Hungary. They are both quality teams, they have done really well to qualify, especially Croatia who’ve won the Davis Cup before.

“We need to prepare as if it’s going to be a real battle against these countries. Croatia have the number one doubles team who won the recent Olympic Games, so there’s got to be as much focus on singles as well as doubles and trying to make out the best possible combinations.”

Australian Davis Cup coaches Tony Roche and Jaymon Crabb will travel with the team, as will Rinky Hijikata who takes up the role of orange boy and hitting partner. Hijikata is currently studying at the University of North Carolina in the US.

Defending champions Spain will be joined by 17 teams in the Davis Cup by Rakuten Finals, played across three cities – Madrid, Turin and Vienna. Australia will compete in Group D alongside Croatia and Hungary at Pala Alpitour Arena. Group E featuring Italy, USA and Colombia will also compete in Turin.

The top team in each of the six groups will advance to the quarterfinals, plus the two best second-placed nations in the draw. The semifinals and final will be played in Madrid.

In March 2020, Australia defeated Brazil 3-1 at Memorial Drive Tennis Centre in Adelaide to secure their spot in the finals. The 2020 edition of the Davis Cup Finals was postponed due to the COVID-19 pandemic.