Spain's Pedro Martinez has eliminated Australian James Duckworth in five sets in the US Open 2021 opening round. 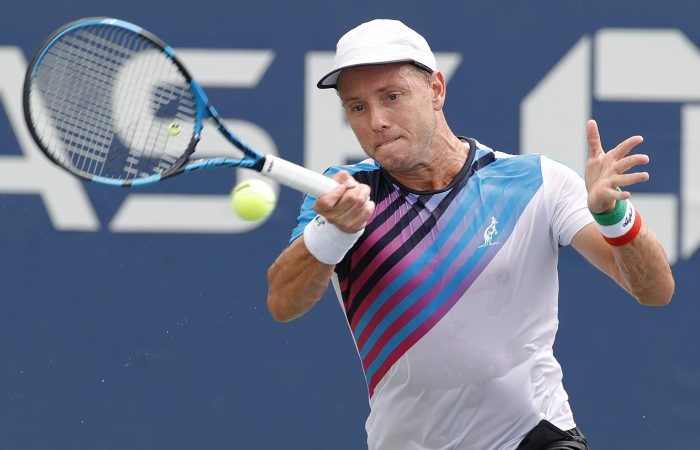 James Duckworth has lost a heart-breaking opening-round encounter at the US Open.

“Today I had five match points and lost. Pretty pissed off really,” a devastated Duckworth said of how he was feeling after the match.

The Australian was in control early of the first-round match in New York, showing his poise under pressure to break Martinez late in each of the opening two sets.

Duckworth faced only three break points across the first three sets, saving all late in the third set.

But Martinez put up a spirited challenge to save five match points – one on a Duckworth double fault – in a tight third set and eventually clinched it in a tiebreak.

It proved a major momentum changer, with Martinez taking control in the fourth set. He broke Duckworth’s serve twice – marking the first time the Australian had lost service games in the match – and levelled at two sets apiece.

The resilient Duckworth kept fighting, breaking the world No.75 in the opening game of the deciding set and then holding serve to build a 2-0 advantage.

However, Martinez reeled off the next six games to seal the first five-set win of his career.

“I was pretty done physically. Couldn’t really do much from from a physical standpoint, which hurt me,” Duckworth conceded.

Duckworth finished the match with 72 winners and 17 aces – but it wasn’t enough to stop him from suffering only the second loss of his career after holding a two-sets-to-love lead.

Earlier today, John Millman lost to Swiss qualifier Henri Laaksonen in straight sets. The world No.43 has been struggling with injury and today’s loss marks the first time since 2014 that the 32-year-old Australian has not won at least one Grand Slam singles match in a season.

> READ: Millman exits in opening round

There was better news for Alexei Popyrin, with the 22-year-old Australian scoring a four-set win against Moldova’s Radu Albot.

> READ: Popyrin powers into second round

But Nick Kyrgios was knocked out in the opening round by No.18 seed Roberto Bautista Agut, while eighth seed and reigning Roland Garros champion Barbora Krejcikova proved too strong for Australian qualifier Astra Sharma.