Ash Barty has her sights set on a second Adelaide International singles title, after overcoming Iga Swiatek in straight sets to reach the 2022 final. 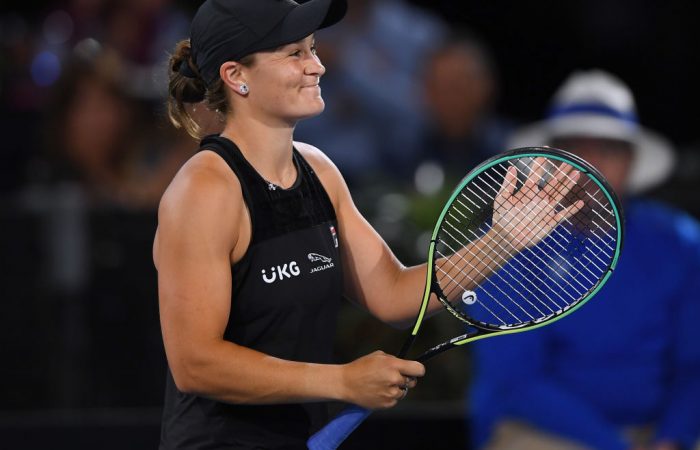 Ash Barty’s perfect start to the 2022 season continues, with the world No.1 advancing to the Adelaide International singles final today.

Barty defeated Iga Swiatek 6-2 6-4 to reach a second final in Adelaide, having lifted her first trophy on home soil at the 2020 tournament.

The local favourite will face Elena Rybakina, the No.7 seed, for the chance to claim a 14th WTA singles title.

The Queenslander will also compete for the doubles trophy in Adelaide, after combining with friend and countrywoman Storm Sanders to reach the final of that event.

“This is unreal,” said Barty, buoyed by the support of a bumper Adelaide crowd after her straight-sets win over Swiatek.

“Honestly, it’s so much fun playing out here tonight and Iga is an exceptional champion. She made me play my best tennis and I felt like we both played pretty well.

“There was really not a lot in it, so I had a lot of fun out here with her tonight.”

In a battle of the two most recent Adelaide champions – Swiatek the winner of the 2020 title without the loss of a set – Barty dominated at the outset.

The only initial test of sorts for the 25-year-old local came as she saved a breakpoint in the fourth game of the opening set. It was one of only two breakpoints of the one hour, 27-minute contest.

After withstanding Swiatek’s early pressure, Barty created plenty of her own to counter. She gained a break in the 20-year-old’s next service game and easily consolidated.

The accomplished Swiatek, who achieved her Grand Slam breakthrough as the Roland Garros singles champion, appeared increasingly bewildered as Barty won five consecutive games to close out the opener in 32 minutes.

While Swiatek extended a more competitive second set, she could never truly find her rhythm against the world No.1.

After surrendering a break in the third game, she increased her aggression and held a break point in the sixth game – again Barty countered it, maintaining her momentum to add to her winning record over upper-echelon opponents.

In 2021, the Australian posted seven wins and just one loss against fellow top-10 stars.

Pleased with her improvement over three 2022 wins in Adelaide, Barty is also encouraged by the quality of opponents she has faced.

“This tournament was exceptionally tough right the way through,” said the No.1, who recovered from a set and a break deficit against Coco Gauff in her opening win, before outclassing Sofia Kenin and Swiatek in straight sets.

“There were certainly no easy matches. I love to test myself against the best in the world and tonight was no different.”

Finishing with seven aces among 22 total winners against Swiatek, Barty easily outnumbered her unforced error tally of 16.  The Pole, by contrast had a costly 31 errors while accumulating 20 winners.

They are pleasing numbers as Barty launches her season with a WTA finals appearance for a second straight year, the world No.1 also a winner of the Yarra Valley Classic in her first 2021 tournament.