Ash Barty and John Peers have become the first Australian team to advance to a mixed doubles semifinal in Olympic history. 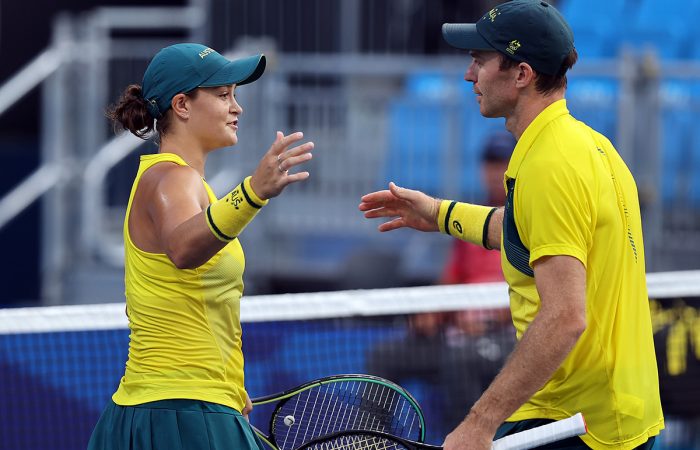 Ash Barty and John Peers are through to the semifinals in the mixed doubles competition at the Tokyo 2020 Olympic Games.

The Australian duo eliminated second seeds Stefanos Tsitsipas and Maria Sakkari of Greece in the quarterfinals this evening, scoring a hard-fought 6-4 4-6 [10-6] victory.

The Greek pair are both top-20 singles players and proved a strong combination while representing their nation at the Hopman Cup in 2019, making them highly-touted medal prospects.

But Barty and Peers, who are both Grand Slam doubles champions, proved to have too much doubles nous in the 76-minute match.

They didn’t panic when Barty dropped her opening service game, responding with some exceptional returning to break Sakkari’s serve to love.

Games continued on serve in a tight opening set until the 10th game, where the Aussies struck to break Tsitsipas’ serve and take a one-set lead.

Tsitsipas and Sakkari bounced back to break Peers’ serve and take a 2-0 lead in the second set – but again, the Australians remained calm under pressure. They kept fighting hard, however couldn’t reel back the early break and the Greeks forced a deciding match tiebreak.

As the tension rose in the high-pressure match tiebreak, Barty and Peers produced some brilliant doubles play to race ahead 7-3.

From there, they closed out an impressive victory to become the first Australian team to ever reach an Olympic mixed doubles semifinal.

Superb net play from @ashbarty and @peers to keep Australia's campaign alive. They get up over Greece's Maria Sakkari and Stefanos Tsitsipas 6-4, 4-6, [10-6] to book a spot in the Mixed Doubles semifinals. #Tokyo2020 | #7Olympics pic.twitter.com/RYlrhXQxSl

Peers and Barty now play fourth seeds Andrey Rublev and Anastasia Pavlyuchenkova, who are representing the Russian Olympic Committee, in the semifinals.

It is the second match scheduled on Court 1 tomorrow, with play beginning from 4pm AEST.

The semifinal winners advance to the gold medal match, with the losing team to contest the bronze medal play-off.

Peers and Barty are aiming to join a select group of Australian tennis players to win an Olympic medal. They could also become the first Australians to win a medal in an Olympic Games mixed doubles competition.