World No.1 Ash Barty will contest the fourth round at Wimbledon for a second time, after eliminating Katerina Siniakova in straight sets . 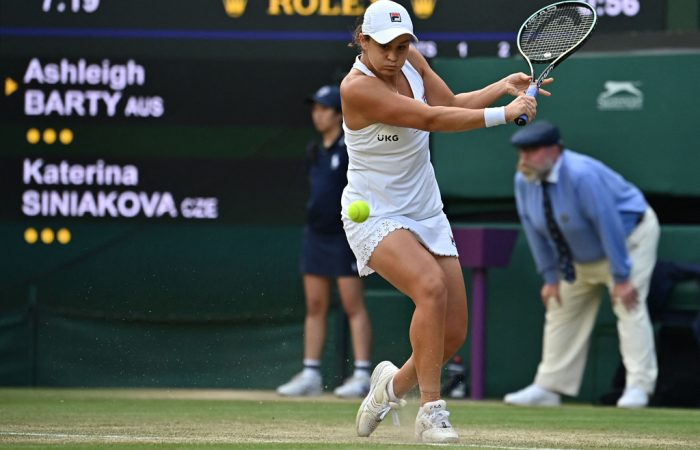 There’s arguably no place that Ash Barty would rather play than on Centre Court at the All England Club.

The world No.1 nevertheless made it a relatively short stay at a favourite setting when she defeated Katerina Siniakova to move into the fourth round at Wimbledon for the second time.

Taking 97 minutes to overcome her world No.64 opponent 6-3 7-5, Barty also showed all the qualities that make her such a compelling player to watch.

Adding to the tour-leading 227 aces she’d already struck this season with eight more against Siniakova, the endlessly creative Barty recorded 26 winners in total in a first singles match against the Czech. And while there were 23 unforced errors for the Australian, she didn’t record a single double-fault.

Those stats underlined Barty’s most accomplished performance at the 2021 Championships, after a three-set challenge from Carla Suarez Navarro in her opening match and a more error-prone performance against Anna Blinkova in the second round.

The No.1 seed matches her best performance at Wimbledon by beating Katerina Siniakova 6-3, 7-5 to progress to the fourth round#Wimbledon pic.twitter.com/cJzXtSAZbg

“I think it was a hell of a match right from the first point. Katerina brought an incredible level and it was a lot of fun playing out here,” said the No.1 seed.

“I knew that I had to play very near my best to be able to  compete with her today, so (I’m) happy to be able to play some good stuff.”

Barty created early pressure against Siniakova, holding three break points in the Czech’s first service game and claiming the crucial break of serve in the sixth game of the opening set. Closing out the opener with a forehand winner and consecutive aces, Barty secured a 6-3 lead after 36 minutes on court.

The 25-year-old from Queensland quickly built on that advantage, racing to a 3-0 lead with a double break of serve in the second set. Siniakova clawed one break back and staged an impressive challenge as Barty served for the match at 5-4.

Three straight aces delivered Barty with a first match point opportunity, but with a pair of errors from her own racquet and a forehand winner from Siniakova, she was unable to convert.

Recovery was swift for the Australian, who secured her fourth service break for the match in the following game and seized victory on her second match point.

Barty next faces Barbora Krejcikova in an intriguing battle between two recent Roland Garros champions. Barty claimed her breakthrough Grand Slam title in Paris two years ago and the Czech was crowned champion in both singles and doubles (alongside Siniakova) at the clay-court major last month.

“I’m looking forward to the challenge. Barbora’s been playing some incredible (tennis) recently. I’ve never played her before so it’s going to be a new one,” said Barty.

“I’m very privileged to be in the second week of Wimbledon again. This is genuinely one of my favourite weeks of the year, so to be able to be prolonging my stay is a lot of fun.”