Thanasi Kokkinakis is determined to maintain winning momentum after outclassing John Millman in an all-Australian first round in Adelaide. 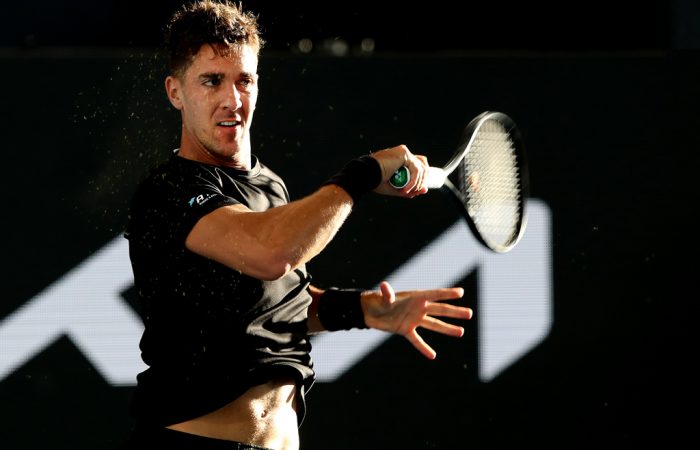 It was a triumphant homecoming for South Australia’s Thanasi Kokkinakis as he defeated fellow Australian John Millman 6-4 6-3 in the Adelaide International first round.

The winning performance sets up a mouth-watering clash with No.4 seed Frances Tiafoe.

“I love coming back here. I haven’t been home here in 12 months,” Kokkinakis said in his on-court interview.

“It was a gruelling year travelling but I’m so happy to play my first professional tournament here in front of my home fans.

“To play a real meaningful tournament and beat such a quality opponent, a proven veteran like Johnny, means a lot. I played great and the support was great so yeah, (I’m) really, really happy.”

SA local @TKokkinakis takes out John Millman 6-4 6-3 in round one of the Adelaide International 👊#AdelaideTennis pic.twitter.com/0h076YrnI8

Kokkinakis was close to flawless on serve in the opening set. He won 88 per cent of points on first serve, sending down five aces, striking 12 winners and facing zero break points.

The 195cm South Australian spoke about starting a season at his best fitness level in years, and the impressive physicality was on full display as Kokkinakis showcased terrific court coverage and groundstrokes.

A classic running crosscourt backhand winner on set point summed up the level he produced in the 35-minute opener.

“I worked really hard in the off-season and I had a lot of continuity week after week. My new trainer Johnno (fitness coach Johnny Parkes) has been massive,” Kokkinakis related.

“I’m hoping for a big year and I’m hoping to keep this momentum going.

“I feel great. I feel mentally refreshed, physically refreshed and I’m hoping this year’s not going to be as much of a grind as last year, but I’m willing to do what it takes to hopefully reach my potential.”

At the start of the second set, Kokkinakis first serve percentage dropped from 77 back to 53, and although he was still winning the majority of points when he landed them, it did open the door for the tenacious Millman.

As the 32-year-old Millman lifted his intensity, Kokkinakis found his range again and he played three huge points in a row to break in the seventh game.

Another break sealed the deal in the ninth game with Kokkinakis sending another reminder of his extreme talent – nearly 12 months after his epic second-round clash with Stefanos Tsitsipas at the  Australian Open.

Kokkinakis looks to his second-round clash with Tiafoe knowing he has beaten the American once before, doing so in the first round at Los Cabos, Mexico, in 2017.

“Me and Frances we’ve been mates for a long time. We know each other really well. He’s really energetic and fun to play,” said the South Australian.

“He had a hell of a year last year, especially at the back end.

“It’s going to be a really tough match. I got him last time but it was many, many years ago so that doesn’t mean much … it should be an exciting match.”