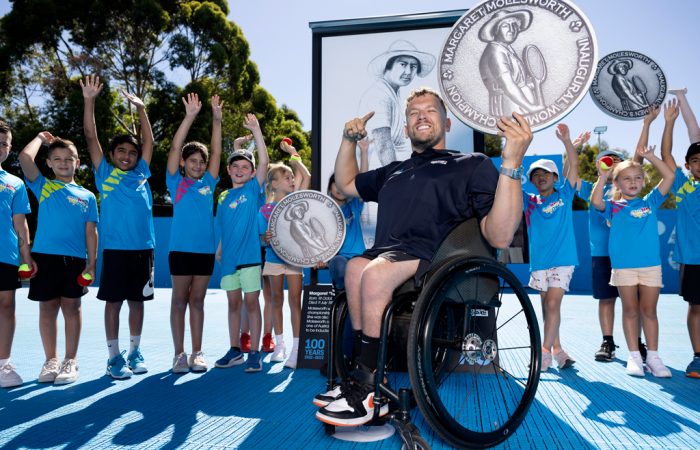 Celebrating 100 years of women’s competition at what is now the Australian Open, the coin honours Molesworth as the inaugural winner of the women’s singles of the Australasian Championship in 1922, which she won again in 1923.

Molesworth was a trailblazing champion and recognised as one of the top 10 players of her time. She went on to become one of Australia’s first female professional tennis coaches.

A group of ANZ Tennis Hots Shots kids joined Alcott to unveil the coin at Birrarung Marr, where they practised the art of the coin toss. With more than 150 ANZ Tennis Hot Shots kids stepping on court as part of the Australian Open 2022 Coin Crew, each child was gifted the limited edition coin as a memento of the once in a lifetime experience.

“ANZ also looks forward to cheering Dylan Alcott on as he competes in his final Australian Open and we send him our best wishes in his next chapter after a truly exceptional tennis career,” Bray said.

The commemorative coins gifted to the 2022 ANZ Coin Crew feature Margaret Molesworth engraved on the ‘heads’ side of the coin, and a tennis ball alongside the ANZ logo on the ‘tails’ side.

ANZ and Tennis Australia are honouring Molesworth as the face of the 2022 ANZ Commemorative Coin to reflect on her outstanding tennis career achievements and contributions to women in tennis.

2022 marks the fifth year of the ANZ Commemorative Coin and in recognition of this milestone, for the first time ever, a highly limited edition Coin Collection featuring a set of all five coins will be available for tennis fans to win. This exclusive opportunity to cherish valuable tennis memorabilia will be up for grabs for diehard tennis fans through a competition on ANZ’s Facebook page launching from 17 January.

ANZ’s Commemorative Coins have previously only been available as limited edition tennis memorabilia for ANZ Coin Crew kids and umpires during the Australian Open tournament.