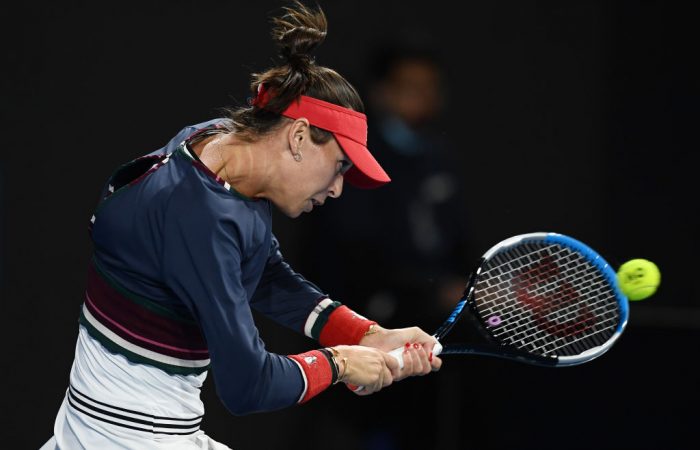 Ajla Tomljanovic has bowed out of the Adelaide International after an epic tussle with American Sofia Kenin.

Kenin, the Australian Open 2020 champion, couldn’t find her rhythm against the skill and craft of the Australian in the first set, but fought back hard, saving three match points to prevail 3-6 7-6(5) 6-3

The victory sets up a mouth-watering quarterfinal against world No.1 Ash Barty, in a repeat of the Australian Open 2020 semifinal.

Tomjlanovic controlled the opening set, breaking serve three times in a row, including to love twice as she dictated terms from the baseline. She also sent down four aces and won 87 per cent of points on her first serve.

In the second set, the Australian appeared to have the ascendency, although Kenin fought hard to keep it on serve. The world No.12 created break point chances at 3-3, but Tomljanovic served her way out of trouble before landing the break herself to lead it 5-3.

However Kenin showed the trademark fight she made famous in her magical run at Melbourne Park in 2020 when she broke as Tomljanovic was serving for the match, before saving three match points at 5-6.

In the tiebreak it was an aggressive Kenin who took control as she blasted a forehand winner on set point to level the contest.

With momentum going her way, Kenin struck early in the third set, breaking for a 2-0 lead.

Tomljanovic kept fighting and broke back twice to get the contest on serve, but every time she did, Kenin would immediately answer and eventually closed out the third set 6-3.

Tomjlanovic generated 16 break point opportunities, converting six, with Kenin converting five of her nine, with that efficiency the difference in a tight contest.

This match was the sixth time in 12 months that Tomljanovic has taken a top 20 player to three sets.

Having won two of those contests, and very nearly a third tonight, showing she isn’t far away if she can find her consistency.