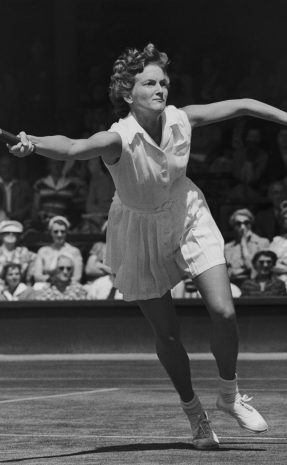 Born in Sydney in 1930, Collier competed in the Australian Open on eight occasions, from 1950 to 1957, winning the singles title in 1955 after defeating compatriot Thelma (Coyne) Long in straight sets.

It was a clean sweep for Collier, taking out the doubles title with Mary (Bevis) Hawton – for a second consecutive year – and the mixed doubles with Neale Fraser.

Her best results came in that year, when in addition to her Australian Open successes, she reached a career-high ranking of world No.5 after playing in four finals and winning the German Championships. She also reached the French Open and Wimbledon quarterfinals.

In 1948 at the age of 16, the right-hander won the Australian girls’ singles title, alongside a singles title at the 1952 Welsh Championships.

Collier was married in 1957 and left her tennis career to start a family with her husband Jim, who passed away in 1989.

Beryl (Penrose) Collier in the news