Barty and De Minaur to light up Sydney Tennis Classic 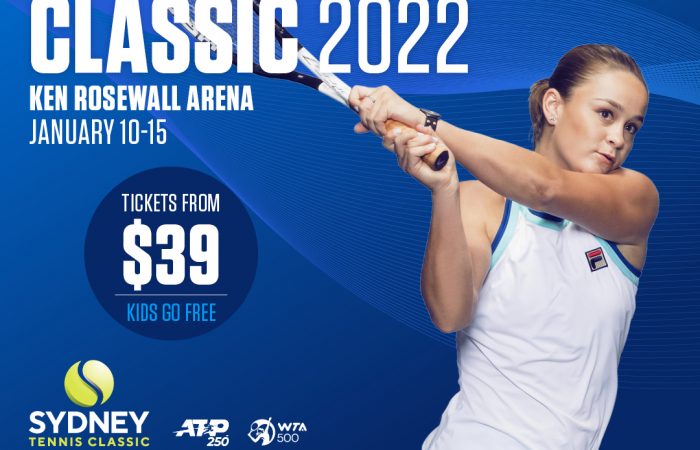 Sydney will host a cast of global tennis superstars when the new, one-off Sydney Tennis Classic, a WTA 500 and ATP 250 tournament is held at Sydney Olympic Park Tennis Centre from 9 to 15 January 2022.

All eyes will also be on reigning US Open women’s champion Emma Raducanu and finalist Leylah Fernandez, along with Australian Open 2020 champion Sofia Kenin.

On the men’s side, four of the world’s top 20 including 2020 US Open champion Dominic Thiem will contest the ATP 250 tournament, as will Australia’s top male Alex de Minaur, who won a title in Sydney in 2019, along with David Goffin and Kei Nishikori, both former top 10 players.

NSW Minister for Tourism Stuart Ayres said this was another exciting event to kick off the summer of sport for the new year and help reinvigorate the NSW visitor economy.

“It is fantastic to see such an incredible world-class line-up for the Sydney Tennis Classic, led by none other than our world No.1, Ash Barty.  Events like these are essential as we help the tourism and major events sectors recover from the pandemic, driving overnight visitation and showcasing Sydney and NSW to a global television audience,” Ayres said.

“Every year Sydney sets up Australia’s annual sporting calendar. Along with the SCG Pink Test and the ATP Cup, the Sydney Tennis Classic will set the national standard.”

NSW Minister for Sport Natalie Ward said it will be terrific to see international tennis stars take centre court in our own backyard.

“I’m thrilled NSW will play host to the Sydney Tennis Classic straight off the back of the ATP Cup,” Ward said.

“As an avid sports fan, I can’t wait to see the world’s top women and men battle it out on the court right here in Sydney, inspiring our future generation of tennis stars.”

“We’re also delighted to see Ash Barty and Alex de Minaur return to Sydney Olympic Park, they’ve both played great tennis here and will have special memories of the venue. It will be a wonderful week of competition.”

Tickets to the Sydney Tennis Classic are now on sale via australiansummeroftennis.com/Sydney.

Fans can sit in the shade at Ken Rosewall Arena after its new canopy roof was introduced in late 2019.

Sydney Tennis Classic is proudly supported by the NSW Government through its tourism and major event agency Destination NSW and will be held after the ATP Cup at Sydney Olympic Park from 9-15 January 2022.