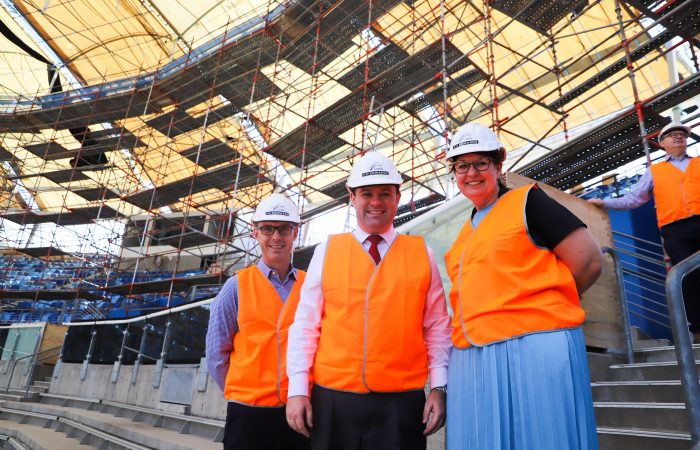 Ken Rosewall Arena will sport a brand new roof in time to welcome the world’s top players for the new ATP Cup in January.

Home to the Sydney 2000 Olympic Games and the Sydney International, the spectacular $50.5 million upgrade to the Sydney Olympic Park Tennis Centre has included the transformation of Ken Rosewall Arena into a multipurpose outdoor covered arena and will feature upsized in-stadia videoboards, and new seating for 10,000 spectators.

The striking new roof is an innovative cable-tension and PTFE fabric design, a first for stadia in Australia, designed by Cox Architecture in conjunction with Arup and Fabritecture. Building company AW Edwards is leading the construction project.

“The new roof structure on centre court will give the fans and players a vastly improved experience, protected from the sun and rain. With just 40 days to go we are looking forward to seeing the venue completely transformed to host the brand new ATP Cup and welcoming the players to Sydney.”

“Major events like the ATP Cup play a crucial role in driving visitation to NSW, so it is fantastic that players and their devoted fans can enjoy these world-class upgrades to Ken Rosewall Arena at the inaugural tournament in Sydney.”

Acting NSW Minister for Sport Geoff Lee added, “The Ken Rosewall Arena is steeped in history with golden memories from the Sydney Olympics but new chapters are about to be written with the world’s best players entertaining crowds under a brand new roof.

“The NSW Government is proud to have funded the transformation of this arena which will be a big hit with the players and the fans.”

A new fan live site, additional upgrades to the precinct and enhancement of the player and media facilities are also well underway.

The ATP Cup will feature nine members of the Top 10, with 26 of the Top 30 players committed to play the new annual 24-country team competition. There is AUD $22 million prize money on the line and a maximum of 750 singles and 250 doubles ATP Rankings points.

Launching the global tennis season, the ATP Cup runs from 3 to 12 January. The tournament will be played over six days in Brisbane, Perth and Sydney. The eight surviving teams advancing to the Final Eight in Sydney.

The all new Ken Rosewall Arena will also be home to the NSW Swifts and GWS Giants for the Suncorp Super Netball competition starting in March.

All ATP Cup tickets including hospitality, packages and single session tickets are on sale via Ticketmaster. Adult tickets start at $30 and children’s go free for day sessions (excluding finals).

The ATP Cup Sydney is supported by the NSW Government through its tourism and major events agency, Destination NSW.

Ken Rosewall Arena is named after one of Australia’s greatest tennis legends.

A former world No.1, Rosewall won 23 tennis majors, including eight Grand Slam singles titles and is considered one of the greatest players of all time, with a career spanning from the early 1950s to the early 1970s.  Ironically nicknamed ‘Muscles’ because of his slight build, he became the first male player to win a Grand Slam tournament without dropping a set at the Australian Open in 1971.

Rosewall won his first Grand Slam singles title, the Australian Championships, at the age of 18, and his record as the oldest player to win a Grand Slam title, at the age of 37 years and two months, still stands.