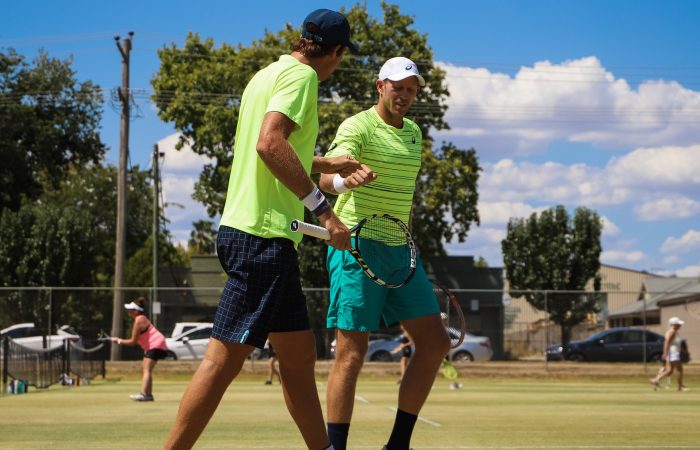 For the first time in 15 years Albury Tennis Association, given sanctioning by Tennis Australia, hosted a Pro Tour Level Tournament. The Albury Grasscourts have previously hosted a number of high-level events, including Grasscourt Nationals in the early 2000s, so there was a genuine excitement around heading back there for this event.

In the week leading in to the Pro Tour, Albury hosted a Men’s $15,000 Platinum, which was led by Brendan Lee as Tournament Director. This provided valuable match practice to many of the Pro Tour field as they had a week off from the Australian swing of the Tour.
The field was headlined by players including Brydan Klein, Dayne Kelly, Harry Bourchier and Colin Sinclair, who were all seeded in the Pro Tour event.

Brydan Klein capped off a perfect lead-up with a 6-3 6-4 win in the Singles Final against Dayne Kelly.

Klein also teamed-up with Scott Puodziunas to claim the AMT Doubles Title with a 6-1 7-6 victory against Harry Bourchier and Chris O’Connell.

As we moved to the Pro Tour, Albury called upon many of their volunteers to help transform the venue to be ready for the arrival of the remaining players. Michael Spry headed up the Pro Tour as Tournament Director, and we had 36 players sign-in for Qualifying, which was held on Monday and Tuesday. Players competed in a 24 draw, in which two rounds were played to determine the six qualifiers that would gain a place in the Main Draw.

First round singles matches and doubles commenced on Tuesday. The level of tennis was great throughout the week and the courts certainly held up with the amount of tennis that was played on them. Albury is lucky enough to have one of the best curators in the country in Shane Reid, who was at the venue every morning and night to ensure that the courts were in pristine condition.

The level of tennis certainly kept rising as we got to the pointy-end of the tournament, with Brydan Klein continuing his good run of form in the top half of the draw. Klein really kicked in to gear, not dropping a set on the way to the final. Matthew Romios had two consecutive three-set victories in his first two rounds, including knocking number three seed Arjun Kadhe out of the Tournament in the process, with an upset win. He was fortunate to receive two consecutive withdrawals from his opponents in the Quarter and Semi-Final, although he was leading well in both matches.

The Men’s Singles Final was played between number one seed Brydan Klein (GBR) and Matthew Romios (VIC) on centre court.

Klein and Romios played out a number of tight rallies early, as both players tried their best to settle into the rhythm of the match. Romios fought back to get back on serve at 2-3 in the first set, before Klein showed his experience and took control of the match to take the first set 6-2. Klein continued to put his foot down in the second set, with Romios showing some resistance early on serve, but Klein was relentless in the end, claiming the match 6-2 6-1 in just over an hour.

The Doubles Final was played on Saturday afternoon, with number two seeds Brydan Klein (GBR) and Scott Puodziunas (QLD) taking the honours with a 4-6 7-5 11-9 win against number one seeds Arjun Kadhe (IND) and Jason Taylor (NSW).

It was a match that was reflective of both pairings weeks in Albury. Both teams didn’t drop a set until the semi-final and came through their respective sides of the draw with very similar results.
The final was played in great spirits with many momentum swings. Ultimately, a few key points late in the Match Tiebreak got Klein and Puodziunas over the line to clinch the title.

As well as the tennis, there were a number of events that were held alongside the Pro Tour Tournament to make it the week it was. A Civic Reception was held on Tuesday Night at the Riverdeck Café. Organised by the Albury City Council it was well received with approximately 30 players in attendance. Thursday saw a Ladies Luncheon held courtside, which was a resounding success. Up to 40 ladies sat courtside and were wined and dined whilst they watched the round of 16 singles matches take place, this brought together the women of the Albury community and presented an opportunity for community engagement in an exceptional tennis tournament.

Friday was a big day with Sam Groth coming to town. He joined-in with a school activation and had a hit with the children on-court. Sam then visited a couple of clubs in the Albury region and then returned for the Albury Pro-Am which was held as a social tennis night at the end of play. Approximately 40 people attended the social Pro-AM they had the opportunity to play alongside Pro Tour players such as Harry and Edward Bourchier, Tom Evans and Rinky Hijikata. It was great to have them volunteer their time and get involved with some social tennis. The social event was a great success, with food and alcohol provided on court and a chance for people in the community to come together and participate in a social non-competitive game of tennis, with a great atmosphere.

Saturday was arguably the biggest event of the week, with Kids Tennis Day being held at the courts between 9-12am. Over 200 children attended and were taken through a number of activities, including ANZ Hotshots.

Sunday, a corporate function was held courtside for the final. With up to 80 key club delegates, council officials, Tennis NSW staff and Board Members in attendance. This was a great opportunity to bring our key stakeholders from not only the Albury Council and surrounds, but the South West region of NSW together to celebrate the great week of Tennis that we had.

Albury Tennis Association also ran a Women’s Platinum AMT alongside the Pro Tour Event, which attracted a number of players who used the event as good match practice for the Mildura Tournament, the following week.

WTA player Storm Sanders was in the Doubles draw, whilst players including Alana Parnaby and Irina Ramialison competed for the title. In the end it was NSW youngster, Taylah Lawless who took the title with a 6-4 6-2 victory against fellow NSW compatriot, Bojana Marinkov. Both players will take great confidence out of the week, knocking out higher ranked players on their way through to the final.

Finally, a big thanks to Scott Ray, Matt Kellert and the team of officials throughout the week. You were a pleasure to work with and I wish you all the best for your next Tournaments.

Completed Draws and Results can be found here