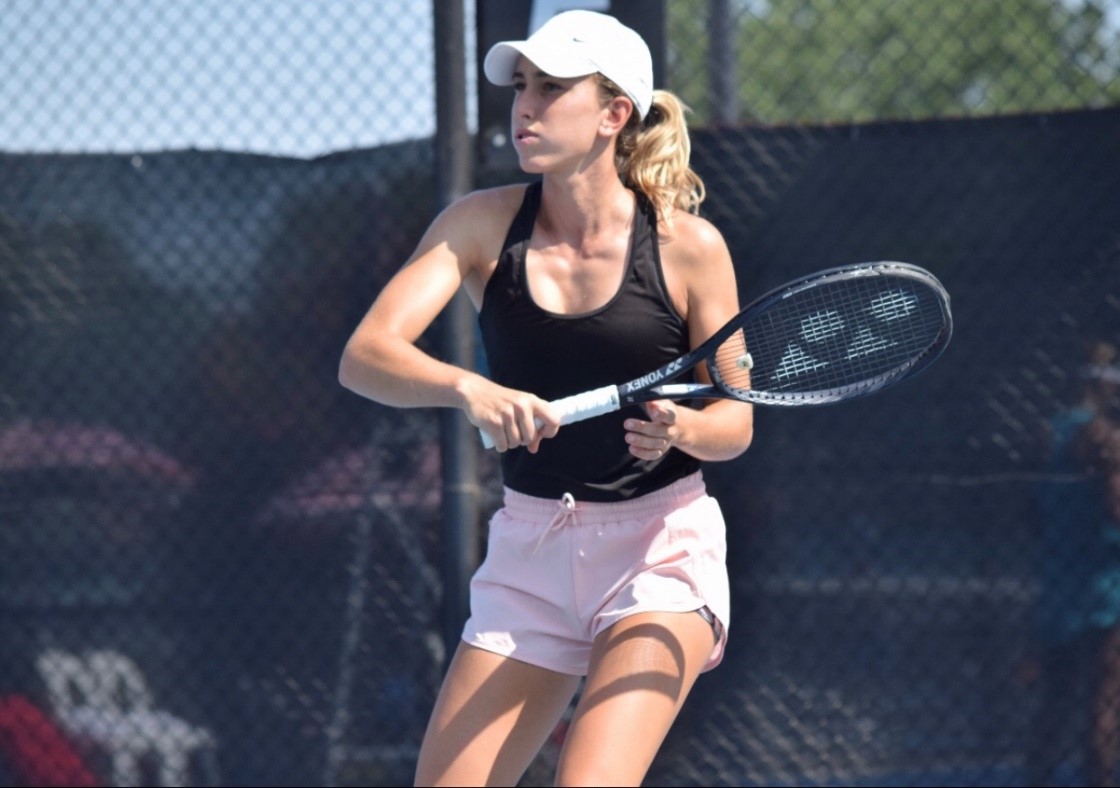 Alex is a professional tennis player who has been playing since the age of 8, and professionally from 14. She has travelled to many parts of the world and met players from all different levels, ages and in stages of their career. Alex says “I hope to inspire other young girls who hold dreams of pursuing a tennis career. No dream is ever too big to conquer”.

Ash Barty has been a major inspiration in my tennis career. She has dealt with immense pressure from a young age and never allowed anything to dictate the decisions made. She fought fiercely to overcome all the dear and doubt, and today is number one in the world. She is truly an inspiration not just for all tennis players but for people in the wider community as well.

Nicole Kriz has also inspired me not just with her dedication on the court but off court as well. Tennis plays a major role in all the women that compete on tour but it doesn’t define them as a person. Nicole has helped me use the aspects learnt on the tennis court in everyday life and encouraged me to be a better person.

What excites you about the future of women and girls in tennis?

There is a strong pool of girls with a lot of talent and potential coming through which is extremely exciting for women’s tennis. There isn’t a certain group of people that dominate on the women’s side, there is a new grand slam winner every time. Sophia Kenin has proven that everything is possible winning the Australian Open at the age of 21. The level is continuously increasing which drives each of us to push harder to be a better player. 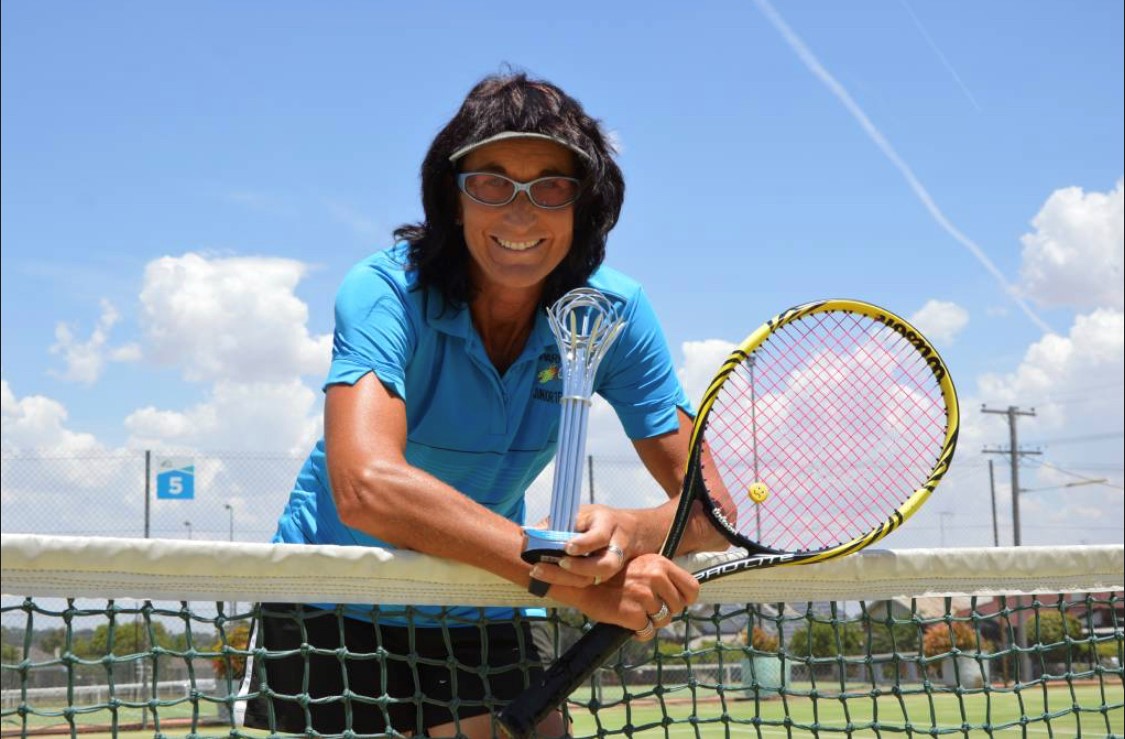 Helen Magill has been a TA Club Pro Coach for 36 years across the Parkes Shire, as well as being a TA Coach Developer, President of Parkes Tennis Club, Tournament Director, Media Liaison ABC Radio, Prime and WIN Regional TV Central West, Selector for the Western PSSA, Regional Delegate, Director on the Tennis NSW Board and a Tennis NSW SHEroes Ambassador.

Over the years what women in tennis have inspired you?

Billie Jean King has inspired girls across the generations and was one of those early on. I heard her say in an interview “keep believing in yourself and whatever you care about, be passionate and you can make a difference in the lives of others”. I have taken this into my areas of my coaching business and off court too.

There are so many female role models and mentors in Tennis who are empowering our women and girls of all ages to consider a career in tennis through playing, coaching, officiating or administration. Currently Tennis NSW has 40% female Directors serving on the Board and Tennis Australia’s Chair is also female. This can directly or indirectly influence other women to seek leadership roles. Young women and girls are more likely to develop leadership aspirations in Tennis if there are visible women leaders to follow. What a great time to be a young female involved in our sport. 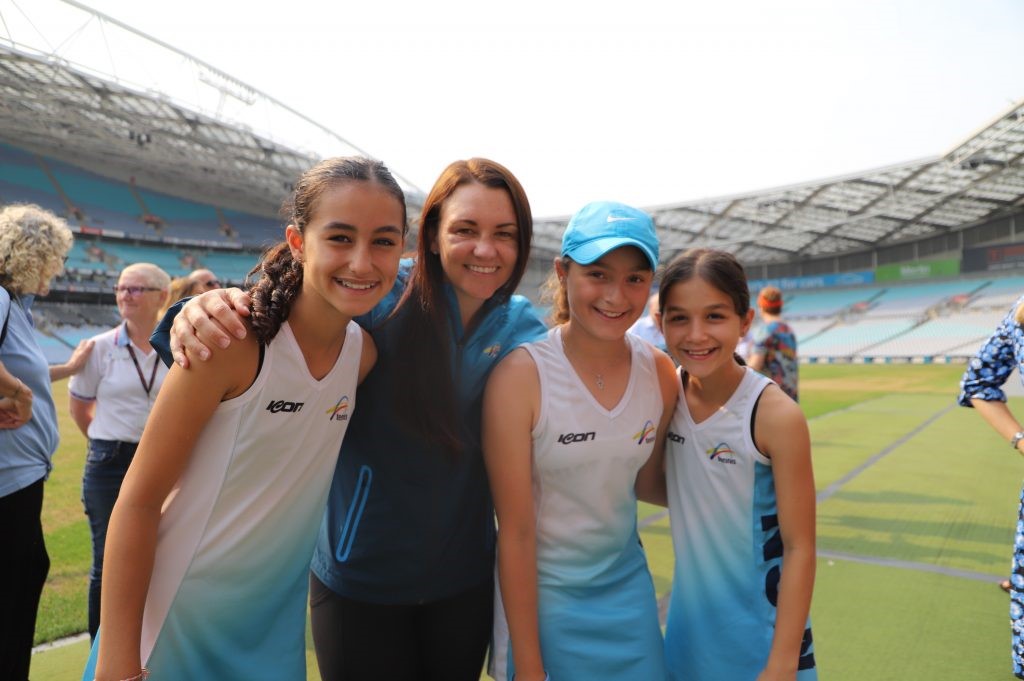 Casey’s most prominent role in tennis over the years has been as a professional player. “I am so proud to have represented Australia at the Fed Cup & the Olympics. Since retiring 2 years ago I have been heavily involved in mentoring and coaching our next generation of players, commentary for major events and also in the process of completing the High Performance Coaching Course”.

My Nan and my Mum have been my biggest inspirations. They both inspired me to have a dream and go for it. They both played tennis at the local club so I followed in their footsteps when I was a young girl.

I am excited because of the endless amount of opportunities there are now available for women and girls. Whether that be a coach, umpire, administrator. I feel like if you are passionate about our sport there is a pathway and opportunities for you. 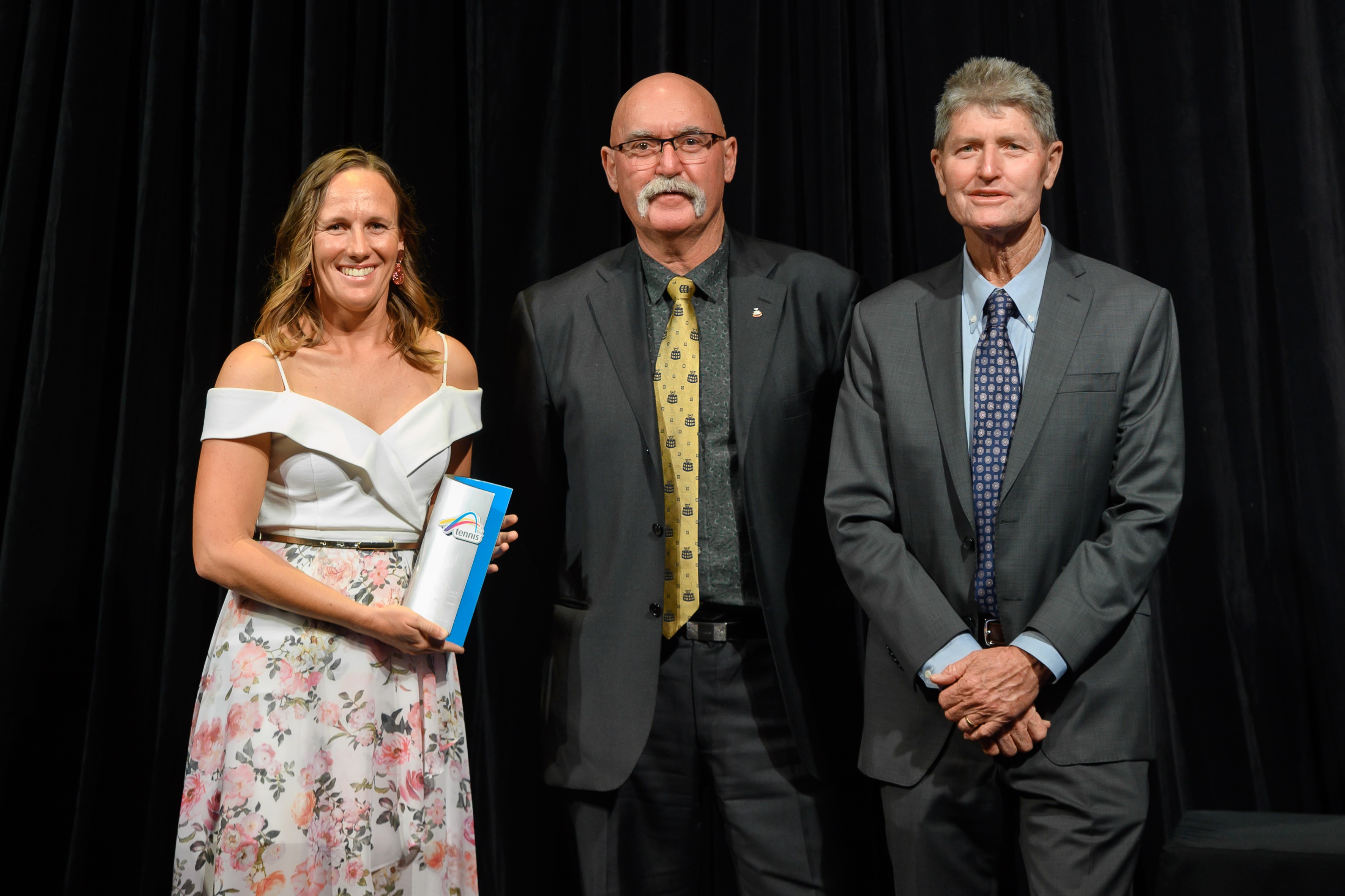 Gemma is a Master Club Pro coach, Head Coach and business owner of Coast Community Tennis, Murwillumbah. Gemma was also recognised as the recipient of the Club Coaching Excellence Award at the 2019 Tennis NSW Awards.

I was fortunate that my first tennis coach was female which really helped me to develop as a confident tennis player and inspired me to stick with the sport over the many years of change. I have two trainee female coaches who continue to motivate me as I continue to help them with future opportunities and educating them in the coaching space.

It really excites me when I see a tennis court full of young girls paying and having fun. When I coach at schools and have girls come up and say “thank you Gemma that was so much fun” gives me so much joy to see I have made a positive impact and sharing my love for tennis. 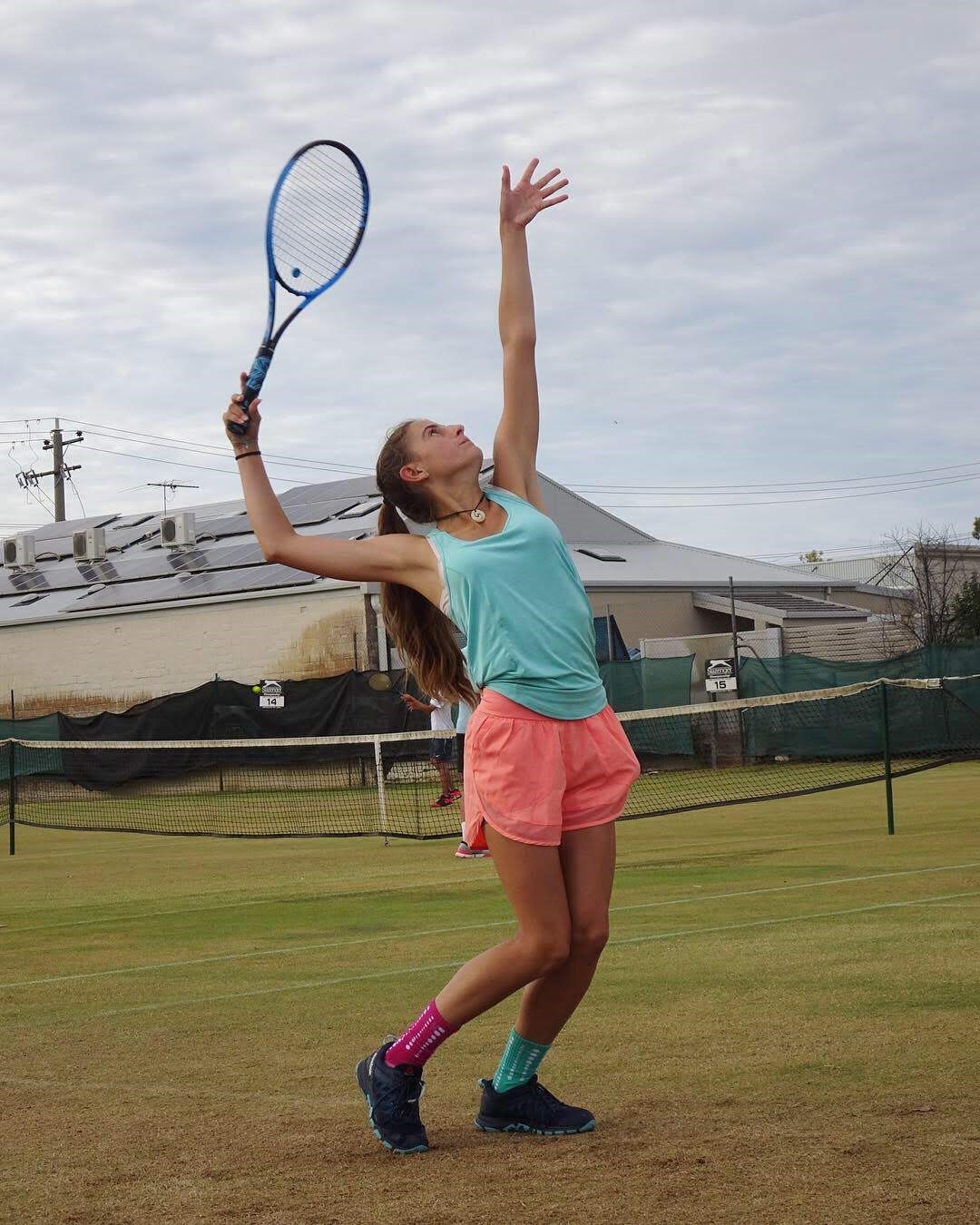 Alyssa Norris is an elite tennis player, coach, volunteer and media coordinator for the south east NSW region. Alyssa was named Junior Volunteer of the year at the 2019 Tennis NSW Awards.

Many women have inspired me over my time in tennis who have made an impact on ow far I have come. I have always looked up to the more well-known women in tennis such as Judy Murray, Billie Jean King and Ellen Perez, but there are also other women off the court that inspire me. The team at Tennis NSW including Tiarnna Spice, Tayla Wilson and Kristina Pejkovic are people who have helped me so much and got me to where I am today. One person who has had a real impact is Karen Muller. Ever since I first met her she has always been encouraging, even in stressful times while tournament directing. Karen has given me so many opportunities and roles to help me learn and get to where I am today. I am so thankful for all the women who have had a positive role to play in my life.

There are so many new opportunities for women to get involved in tennis, and now with Ash Barty and so many of the other professional female athletes it is so exciting what will happen with the development of new events and program. There has already been amazing work done in tennis including as the SHEroes program which is continuing to grow. It is limitless to what we can do in the future.

Tiarnna is the Membership & Communications Manager at Tennis NSW. Tiarnna also leads the Women and Girls team at Tennis NSW, who are working towards developing and implementing an effective Women & Girls Strategy to support and foster women and girls involved in tennis throughout the state.

The women that inspire me are the ladies I work with on a day to day basis. I am very lucky to work at Tennis NSW, it is an organisation that is full of passionate people who are eager to improve opportunities for women and girls through tennis.

(Tiarnna says the ladies who she works with on a day to day basis inspire her, while she also inspires many others in the organisation and the sporting industry)

It motivates me that there is a larger focus now more than ever, both nationally and at a state level, on what tennis can do for women and girls and on the development of the initiatives to ensure they are fully supported by the sport.