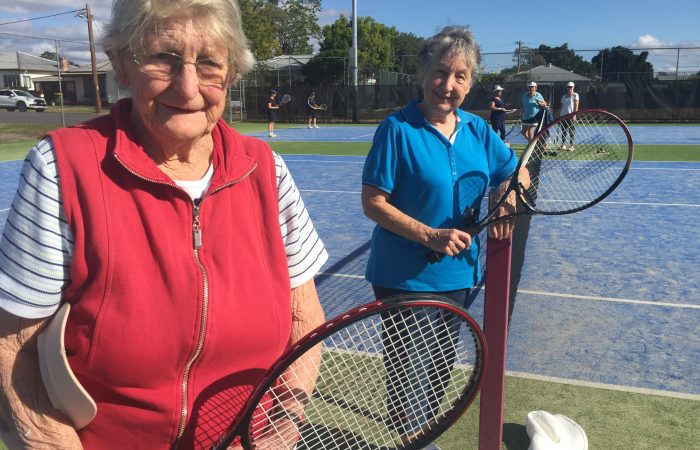 Eighty-seven year old and regular competitor Pansy Ostler from Pappinbarra is hanging up her racquet after a respective tennis career. Pansy grew up playing through her school years in her home town of Kindee, and for the last 20 years she has been a regular with the Wauchope Tennis Club, playing in the ladies social competition every Tuesday. Pansy was one to fear on the court with her signature forehand slice, winning her many points over the years.

She says in her early days of playing, “tennis was a very important way to interact socially with your neighbor’s. It was a big part of what you did”.

Granddaughter Crystal Clarke says she is proud of her inspiring and amazing grandmother. “She goes out there on court to firstly have fun, secondly, enjoy the social atmosphere and thirdly, blitz the ball down the sidelines and win the point”.

You may ask, why is she giving up now? “The old legs just can’t get going fast enough anymore,” she said. Though her competitiveness and her loves for the game hasn’t faded, she said she would like to see her children, grandchildren and great grandchildren get on the court a bit more often.

Also announcing their retirement from the Tuesday competition is eighty-one year old Pattie Tudhope. After the ladies taught her how to play after retiring, spending the last 20 years on court she has decided to also retire, as she notices she tires more frequently on court.

Pansy and Pattie have had stellar playing careers alongside some great people and have shown that tennis is truly a sport you can play for life.