‘No place for impossible’ on day three of Australian Open 2021

Five Australians face seeded opponents in second-round singles action today at Australian Open 2021 - but that doesn't mean their chances should be discounted. 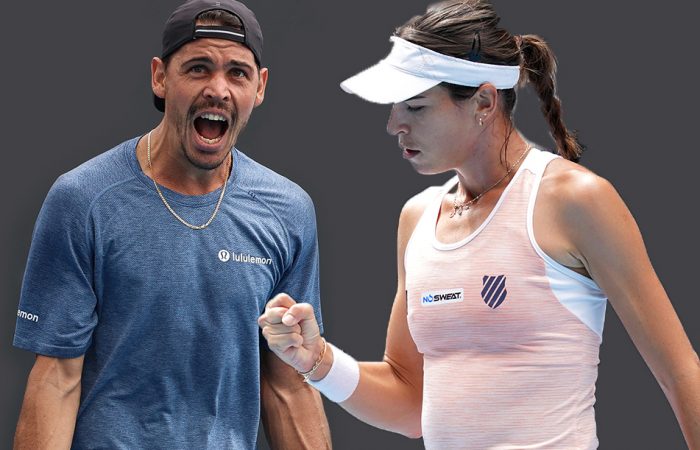 “No place for impossible” is the tagline for Australian Open 2021 – and it is also the mentality our Australian players plan to adopt on day three.

On paper the match-ups look difficult, but anything could happen – as we have already seen across two fascinating days of play at Melbourne Park this week.

Alex Bolt, a wildcard ranked No.166, scored his first top-100 win in over a year to earn his place in the second round. The 28-year-old South Australian, who noted the advantage of a home crowd after his win on Monday, now faces three-time major semifinalist Grigor Dimitrov.

“I feel like I’ll be coming in as the underdog. He’ll be expected to win,” Bolt happily admits, acknowledging the exciting opportunity to play pressure-free.

Ajla Tomljanovic shares a similar mentality ahead of her showdown with world No.2 Simona Halep.

“When you’re facing a seed in these Slams, it’s never easy,” says the world No.72. “They’ve been in these situations more than me. They’ve had more wins on this stage. I definitely consider myself coming into all these matches as an underdog, which helps me as well.

“At the same time I do have the belief that I can win … but I’m definitely not putting so much pressure prior to the match.”

Are these seeded players in danger against our free-swinging Aussies? We’ll find out on an exciting day three at Melbourne Park.

There are plenty of reasons to smile right now … 😁

Twelve Aussie players have advanced to the @AustralianOpen second round for the first time since 1992.

The last time this happened, our world No.1 Ash Barty wasn't even born 😮 #GoAussies pic.twitter.com/OSxt6gbAju

James Duckworth (AUS) v [20] Felix Auger-Aliassime (CAN)
Men’s singles, second round, Court 3, second match
After snapping an eight-match losing streak in Grand Slam matches, the 29-year-old Duckworth enters today’s match brimming with confidence. “I probably haven’t hit the ball this well for five years, so I’m really happy confident in myself right now,” the world No.105 said after his first-round win. His next opponent is the youngest player in the world’s top 20 and also in solid form, reaching last week’s Great Ocean Road Open final at the Melbourne Summer Series. Duckworth has beaten the 20-year-old Auger-Aliassime once before – in the Canadian’s first-ever ATP-level match in 2016.
Head-to-head record: Tied at one-all
Last meeting: Auger-Aliassime won 6-3 7-6(0) (Adelaide, 2020)

[Q] Bernard Tomic (AUS) v [11] Denis Shapovalov (CAN)
Men’s singles, second round, Court 3, fourth match (not before 4pm AEDT)
Tomic has a 1-8 win-loss record against top-20 opponents over the past four years, however the resurgent 28-year-old is proving he should never be dismissed. After qualifying for the Australian Open for a first time, the world No.233 is through to the second round at Melbourne Park for the first time since 2017. Tomic, a former world No.17, now faces a big test against the fearless Shapovalov – a left-handed 21-year-old, who is currently ranked No.12. Tomic can take confidence from his enviable record at Melbourne Park, where he is on a six-match winning streak in second-round matches.
Head-to-head record: First career meeting

Nick Kyrgios (AUS) v [29] Ugo Humbert (FRA)
Men’s singles, second round, John Cain Arena, fourth match (not before 7pm)
Following his opening-round win against a fellow 25-year-old opponent making his Grand Slam debut, Kyrgios quipped: “I feel old.” His second-round opponent is only 22, so once again the Australian will have an edge in experience. But Kyrgios knows he can’t afford to take the left-handed Frenchman lightly. “I think he’s one of the most improved players on tour,” the Australian notes of the world No.34. Kyrgios is attempting to reach the Australian Open third round for the fifth time in his career, while Humbert is already enjoying a career-best run at the tournament.
Head-to-head record: Humbert leads 1-0
Last meeting: Humbert won 6-3 ret. (Acapulco, 2020)

Ajla Tomljanovic (AUS) v [2] Simona Halep (ROU)
Women’s singles, second round, Margaret Court Arena, night session, first match (from 7pm AEDT)
Aiming to advance to the Australian Open third round for the first time in her career, 27-year-old Tomljanovic faces a fierce test against the world No.2. “I’ve played Simona a few times, I’ve never beaten her. It’s always been close,” says the No.2 Australian woman, whose first two tour matches against Halep extended to three sets. “I do feel like if I execute my game plan, I do have a chance.” The 29-year-old Halep, who was an Australian Open finalist in 2018, has a 6-0 win-loss career record in second-round matches at Melbourne Park.
Head-to-head record: Halep leads 3-0
Last meeting: Halep won 6-4 7-5 (Adelaide, 2020)

[WC] Alex Bolt (AUS) v [18] Grigor Dimitrov (BUL)
Men’s singles, second round, Margaret Court Arena, night session, second match
Big-serving Bolt faces a major challenge against world No.19 Dimitrov, a former world No.3 and three-time Australian Open quarterfinalist. The Aussie wildcard is yet to beat a top 25-ranked opponent, but can take confidence from pushing eventual finalist Dominic Thiem to five sets at this stage of last year’s Australian Open. “I have a lot of belief in my game that I can take it to a lot of these guys now,” says the world No.166. “It’s going to be a tough battle. I just can’t wait to get out there and play.”
Head-to-head record: First career meeting

[15] Max Purcell (AUS)/Luke Saville (AUS) v Guillermo Duran (ARG)/Albert Ramos-Vinolas (ESP)
Men’s doubles, first round, Court 5, second match
After making last year’s Australian Open men’s doubles final as wildcards, 22-year-old Purcell and 27-year-old Saville are seeded at a Grand Slam for a first time. It has been a remarkable and well-earned rise for the Aussies, who are now entrenched inside the world’s top 40 in doubles.

[10] Sam Stosur (AUS)/Zhang Shuai (CHN) v Leylah Fernandez (CAN)/Heather Watson (GBR)
Women’s doubles, first round, Court 5, third match
The last time 36-year-old Stosur teamed with Zhang, the duo claimed the Australian Open 2019 title. Reuniting this season, can they continue their winning streak at the tournament? Stosur, who is currently ranked No.33 in doubles, has only lost in the opening round of the AO women’s doubles competition twice in the past 17 years.

Ash Barty (AUS)/Jennifer Brady (USA) v [WC] Abbie Myers (AUS)/Ivana Popovic (AUS)
Women’s doubles, first round, Court 13, third match
At world No.14, Barty is Australia’s top-ranked doubles player. Her new partner in 2021 is an American who has made the Australian Open women’s doubles quarterfinals for the past three consecutive years. Popovic, a 20-year-old from Sydney, is making her Grand Slam doubles debut alongside 26-year-old Myers, who last played AO doubles in 2015.

[10] John Peers (AUS)/Michael Venus (NZL) v Alex de Minaur (AUS)/Matt Reid (AUS)
Men’s doubles, first round, Court 14, third match
The winners of three ATP titles in 2020, 32-year-old Peers and his Kiwi partner established themselves as one of the world’s top teams. They face the Aussie combination of De Minaur and Reid, who are contesting their fourth Grand Slam together. The close mates are unbeaten in first-round major matches as a team.