Alexei Popyrin stuns No.13 seed David Goffin in the first five-set win of his career to reach the second round of his home Grand Slam. 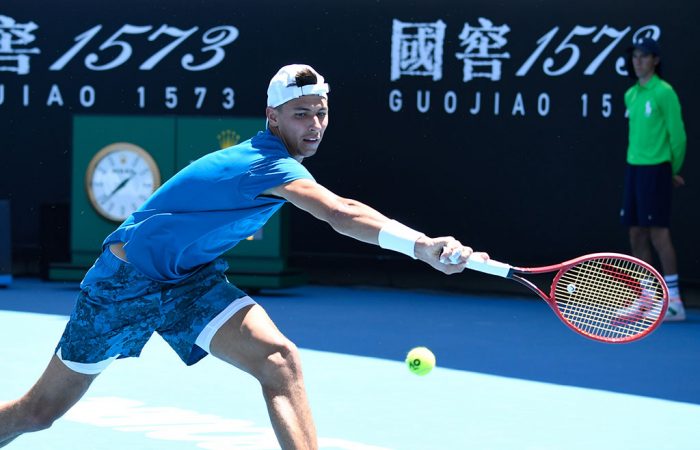 On his return to the competitive arena last week, Alexei Popyrin declared he always produces his best tennis at the Australian Open.

The young Australian demonstrated exactly that as he stunned No.13 seed David Goffin in five sets.

In a career-defining performance, the 21-year-old saved four match points in the 65-minute fourth set and recovered from an early break of serve in the fifth to set up a meeting with South Africa’s Lloyd Harris.

“I was near the brink of losing, so I think when coming back from match points, it really gives you confidence for the upcoming rounds, and also the way I played was really pleasing to me,” he said.

“All the pre-season work that I did physically and on my game, you know, it all paid off today.”

Popyrin brings it home in five sets, defeating the 13th seed in the opening round of the @AustralianOpen 💪 pic.twitter.com/CxhfQyqZY6

Spanning three hours and 47 minutes before an increasingly excited crowd on Melbourne Park’s Court 3, it was a match that could have gone far differently after the world No.114 dropped his serve in the opening game.

With another break of the Australian’s serve in the ninth game, Goffin held a 6-3 lead in a comfortable 32 minutes.

But appearing more energised in the second set, Popyrin secured a break of his own in the seventh game and was able to dictate against the vastly more experienced 30-year-old. With confidence growing, he levelled the match.

After exchanging service breaks in the third set, the Belgian again gained the edge in a tiebreak.

The fourth set would provide the most dramatic turning point as Goffin served for the match at 5-4 and at 40-15, held a pair of match points.

Helped by a pair of untimely double faults from the Belgian, Popyrin also lifted. Forcing the No.13 seed into error, he saved those match points and another two in the tiebreak.

While Popyrin drew energy from his many supporters, Goffin was clearly tiring. He claimed a final break of serve in the second game of the fifth set but couldn’t consolidate, the Australian riding the momentum to celebrate the biggest win of his short career.

The Australian’s next priority is replicating that performance, Popyrin taking a 0-2 head-to-head record into the second round against Harris.

“It’s definitely going to be really, really tough. I’m not taking it easy one bit, so it’s going to be a really tough match, and hopefully I can perform the way I did today with less match points.”

Popyrin will take confidence from the 12 aces and 50 total winners against Goffin – more importantly for the 21-year-old Sydneysider, contesting only his fourth Australian Open main draw, was responding so positively when the pressure was on.

Asked to rate where the win rated in overall career victories, Popyrin’s feelings were clear. “Number one. That was number one by far,” he smiled.