Sam Stosur, the US Open champion in 2011, has been awarded a main-draw wildcard and will contest her 15th tournament at Flushing Meadows. 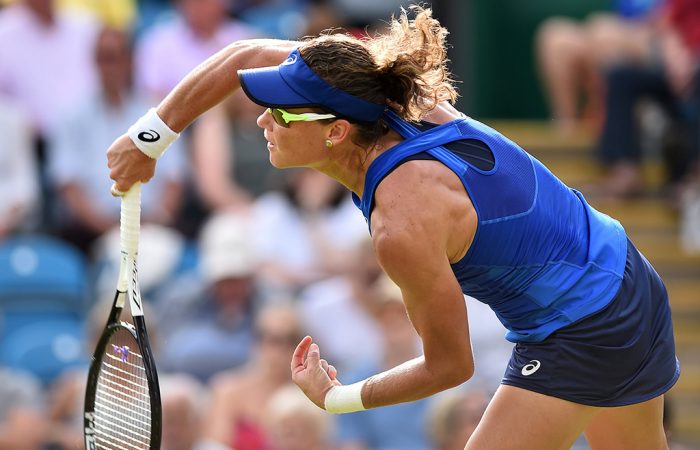 Former champion Sam Stosur will contest a 15th US Open after being handed a wildcard into tennis’s final Grand Slam event of the year.

A stunning winner over Serena Williams in the 2011 final, Stosur will join world No.2 Ash Barty and fellow Australians Ajla Tomljanovic, Daria Gavrilova and Astra Sharma in the women’s singles draw in New York.

“I’m so excited and grateful to receive this wildcard. It’s a great feeling knowing I can play at the US Open again where I have so many wonderful memories,” Stosur said.

“I guess I have always felt a little confidence boost here since I won. Coming here each year since 2011 always feels that extra bit special. Hopefully I can draw on that and play well and enjoy another good result here. It feels good to be back in New York.”

Stosur will play the new WTA event in New York’s Bronx the week before the US Open, in what will be her only hard-court tune-up event prior to the main event.

She was due to play post-Wimbledon clay-court events in both Lausanne and Palermo, but after reaching the quarters in Lausanne, withdrew from Palermo and returned home, mentally and physically fatigued after 14 weeks on the road.

She took a much-needed week off at home then resumed training in Melbourne before heading to the United States earlier this week.

“My left ankle’s been sore, on and off, basically since Fed Cup. And that kind of flared up in Lausanne,” Stosur told tennis.com.au.

“The quarterfinal I lost to Ferro, I thought I actually played pretty decent. I was just tired. And she ended up winning the tournament anyway. She is a good player. So I wasn’t too concerned about that. Even through the grass I was pretty pleased with the way I played.

“It’s kind of hard to gauge (hard court form when) you’re home now, because it’s so cold (in Melbourne), you’re indoors, it’s nothing like what it’s going to be in the US.

“So I’m kind of just each day making sure I’m hitting, doing what I need to be ready when I get over there. I’m not stressed out if I’m not hitting the ball amazing here, because it makes no difference (laughter).”

The 35-year-old Stosur, who has slipped to No.131 in the world rankings, will be the third oldest player in the draw behind 37-year-old Serena and the American’s sister Venus, who turns 40 next year.

Also a quarterfinalist at Flushing Meadows in 2010 and 2012, as well as a doubles champion in 2005 with Lisa Raymond, Stosur is among eight women to receive wildcards into the singles this year.

The other seven are all American up and comers, including 15-year-old sensation Cori “Coco” Gauff, who last month reached the Wimbledon fourth round after becoming the youngest qualifier in history and famously beating five-time champion Venus en route to the last 16.

Another 16 Australians — eight men and eight women — have entered US Open qualifying.

Australians at the US Open