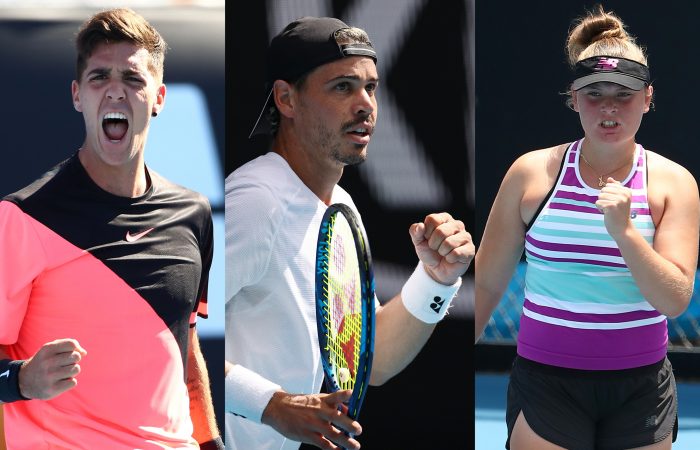 Kokkinakis is on the comeback trail, with the former world No.69 set to take part in his fifth main draw at Melbourne Park after missing the 2020 event due to glandular fever.

“I’m super happy and thankful to have gotten a wildcard into the AO,” Kokkinakis said.

“Shattered I couldn’t play this year due to illness but I’m feeling great now and can’t wait to get out in front of the home crowd and have some fun.”

The South Australian, currently ranked 260th, has not played an officially-sanctioned match since September 2019, but did win a pair of UTR Pro Tennis Series events at Melbourne Park last month – a sign he is rounding into form at just the right time.

Higher up the rankings is Bolt, who has been rewarded for his impressive performances on tour in 2020.

Bolt, who stretched eventual finalist Dominic Thiem to five sets in the second round at AO 2020, reached the Launceston Challenger final a month before professional tennis was suspended due to COVID-19. Bolt was also selected in the Australian Davis Cup Team for the first time in March ahead of the tie in Adelaide against Brazil.

Kempenaers-Pocz will take part in Australian Open qualifying, which will be held offshore between 10-13 January, with the women competing in Dubai.

After claiming the 18/u Australian Championship in December 2019, Kempenaers-Pocz won her first ITF World Tennis Tour junior singles title in February and has enjoyed some excellent results through the UTR Pro Tennis Series events around Australia during 2020.

Australian Open 2021 tickets are on sale via ticketmaster.com.au.