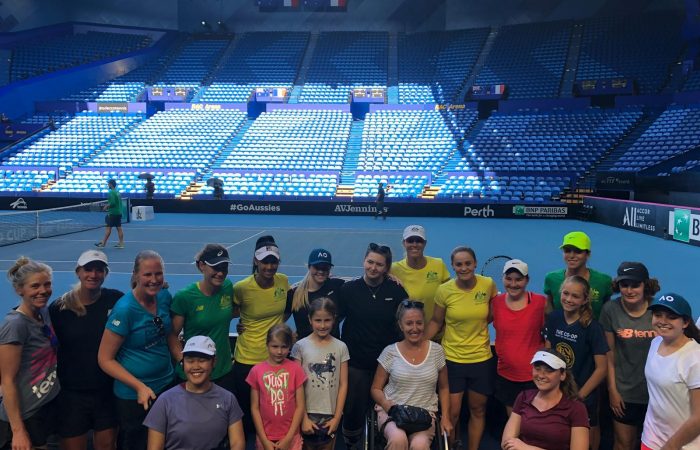 Western Australian tennis star, Casey Dellacqua, was back home in Perth on the weekend, hitting the courts at the State Tennis Centre to mentor some of Australia’s top junior tennis players at a national training camp.

To help put the future of the sport through their paces, Dellacqua will be joined by fellow Aussie tennis greats Todd Woodbridge and Sandon Stolle.

South Australia’s Blake Hanlon and Christian Salmeron took part in the six-day camp, which coincided with the Australia v France Fed Cup Final in Perth. The camp was specifically designed for girls and boys who are turning 13-years of age in 2019.

Wellbeing was also a component of the camp to help the players thrive physically and emotionally on and off the court. Ben Robertson, Tennis Australia’s National Performance Wellbeing Manager, presented these sessions.

Also taking place on the weekend was the Fed Cup Talent Development Inclusion Camp, bringing together participants from all four disability areas (players with an Intellectual Impairment, blind or low vision, deaf and wheelchair).

As well as on court training sessions, players had the opportunity to meet members of the Australian Fed Cup Team.

Congratulations to Andriana Petrakis, Courtney Lewis, Kortney Rollins and Macy Lane who are represented South Australia at this camp.