US Open 2021: Eighteen Australians to compete on day four

Ajla Tomljanovic, Jordan Thompson and Ash Barty lead a strong Australian contingent on day four at the US Open. 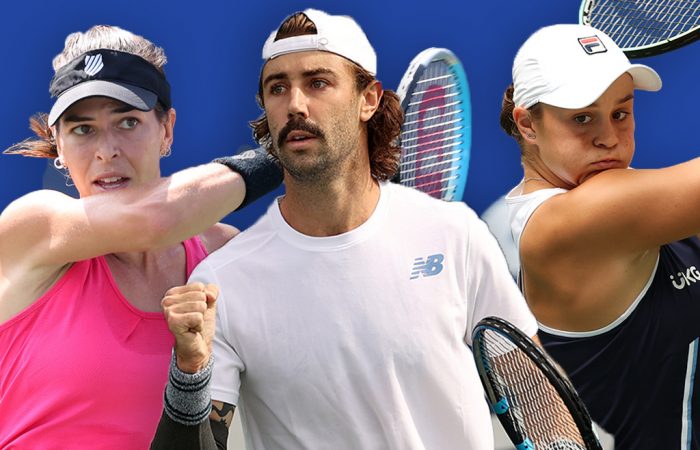 After rain impacted play in New York yesterday, the day four schedule is jam-packed with exciting singles and doubles match-ups – and features 18 Australian players in action.

This includes world No.1 Ash Barty, Ajla Tomljanovic and Jordan Thompson competing in second-round singles matches, all hoping to join fellow Aussie Alexei Popyrin in the third round.

Australians in action on day four:

[1] Ash Barty (AUS) v Clara Tauson (DEN)
Women’s singles, second round, Arthur Ashe Stadium, day session, first match (from 2am AEST)
After defeating one of the eldest players in the draw in the opening round, Barty now plays one of the youngest. The 18-year-old Tauson, who is ranked No.78 and on a six-match winning streak after winning a WTA 125 title in Chicago last month, is making her US Open debut. Barty admits she is unfamiliar with the former world No.1 junior. “To be honest, I haven’t seen a lot of her,” said the 25-year-old Barty, who welcomes any challenge. “I think a new one (challenge), a fresh one is exciting. We go into it and hopefully we’re clear as a bell, and we can just go out and there and try and execute.” This is Tauson’s first career meeting with a top 10-ranked opponent.
Head-to-head record: First meeting

Jordan Thompson (AUS) v [21] Aslan Karatsev (RUS)
Men’s singles, second round, Court 11, second match
Thompson’s steely fighting spirit was on show in the opening round, where he scored a five-set win. He faces another big test in the second round, facing Australian Open 2021 semifinalist Karatsev. The 27-year-old Russian is enjoying a remarkable breakout season. He started the year ranked No.112 and is now making his US Open main draw debut as the world No.25. This gives 27-year-old Thompson, who is competing in his sixth US Open main draw, a valuable edge in experience in this match-up. The world No.59, who enjoyed a career-best fourth-round run at the tournament last year, has a 1-2 career record in second-round matches in New York.
Head-to-head record: First meeting

Ajla Tomljanovic (AUS) v [30] Petra Martic (CRO)
Women’s singles, second round, Court 5, fourth match
More than a decade has passed since world No.46 Tomljanovic last played world No.32 Martic – and a lot has changed in that time. Both players have fought back from career-threatening injuries to enjoy new highs – 30-year-old Martic peaking at world No.14 last year after recovering from a back injury, while 28-year-old Tomljanovic has undergone a shoulder reconstruction and earlier this year reached the Wimbledon quarterfinals. Martic has made in the fourth round in New York for the past two years, while Tomljanovic is looking to advance to the third round for the first time in her career. The Australian has an 0-4 win-loss record at this stage of the tournament.
Head-to-head record: Martic leads 2-0
Last meeting: Martic won 6-4 6-0 (Australian Open 2011)

Astra Sharma (AUS)/Hayley Carter (USA) v Tereza Martincova (CZE)/Marketa Vondrousova (CZE)
Women’s doubles, first round, Court 14, first match
Sharma makes her US Open doubles debut alongside a fellow US college graduate, world No.25-ranked Carter. This is the second time she has teamed up with the 26-year-old American at tour-level, also playing at Roland Garros earlier this year. The 25-year-old Sharma has made two tour-level doubles finals so far this season and is currently ranked No.127. They face Czech combination 26-year-old Martincova and 22-year-old Vondrousova, who were semifinalists at a WTA tournament in Chicago last week.

[8] John Peers (AUS)/Filip Polasek (SVK) v Luke Bambridge (GBR)/Ken Skupski (GBR)
Men’s doubles, first round, Court 15, first match
Peers, the world No.25 and a US Open doubles finalist in 2015, is competing in New York for a ninth consecutive year. The 33-year-old has a new partner in world No.14 Polasek, a 36-year-old Slovak who won the Australian Open doubles title in February. After scoring only a single win in their first three tournaments together, they are looking to build some positive momentum against world No.59 Bambridge and world No.60 Skupski. Peers owns a 7-1 career win-loss record in US Open first-round matches.

Anastasia Rodionova (AUS)/Arina Rodionova (AUS) v [4] Nicole Melichar-Martinez (USA)/Demi Schuurs (NED)
Women’s doubles, first round, Court 6, second match
The Rodionova sisters are teaming up at a Grand Slam tournament for the 10th time – and for the first time since Wimbledon 2017. It is 31-year-old Arina’s sixth US Open doubles appearance, while 39-year-old Anastasia is making her 16th. This is Anastasia’s second tournament in a return from maternity leave and her first major appearance since Australian Open 2019. They play world No.12 Melichar-Martinez and world No.13 Schuurs, who have won two titles together this season.

Max Purcell (AUS)/Matthew Ebden (AUS) v Dusan Lajovic (SRB)/Brandon Nakashima (USA)
Men’s doubles, first round, Court 6, third match
Australian combination Purcell, ranked No.42, and Ebden, ranked No.69, are teaming up for the first time in their careers. This is 23-year-old Purcell’s second US Open doubles appearance, while 33-year-old Ebden is competing for a fifth time and for the first time since 2018. Both Aussie players have posted their career-best Grand Slam doubles results at the Australian Open, with Purcell reaching the 2020 final and Ebden advancing to the quarterfinals earlier this season.

[14] Sam Stosur (AUS)/Zhang Shuai (CHN) v Jasmine Paolini (ITA)/Jil Teichmann (SUI)
Women’s doubles, first round, Court 11, third match
Stosur has an incredible 30-12 win-loss record in US Open doubles. The world No.55 is a five-time semifinalist in New York and won the 2005 title alongside American Lisa Raymond. The 37-year-old Stosur is teaming up with world No.27 Zhang of China again this year. This is their fourth US Open as a team and they are aiming to better a 2018 semifinal appearance. The Australian Open-winning duo are a formidable combination, as they proved with their recent title-winning run at Cincinnati.

Alexei Popyrin (AUS)/Tommy Paul (USA) v [7] Jamie Murray (GBR)/Bruno Soares (BRA)
Men’s doubles, first round, Court 14, third match
Popyrin makes his US Open doubles debut alongside a first-time partner, American Paul. The 22-year-old Australian, who recently made his first tour-level doubles semifinal, has a 3-5 career win-loss record in Grand Slam doubles matches. They have a tough first-round assignment against the No.7 seeds. Murray and Soares have won two major titles as a team, including the US Open in 2016. Reunited this season, Soares is currently ranked No.11 and Murray is No.22.

Luke Saville (AUS)/John-Patrick Smith (AUS) v Ricardas Berankis (LTU)/Benoit Paire (FRA)
Men’s doubles, first round, Court 15, third match
World No.29 Saville and world No.71 Smith are competing in their second Grand Slam tournament together – and first since Australian Open 2016. They have made two tour-level quarterfinals as a team this season, including at Winston-Salem last week. This is 27-year-old Saville’s second US Open appearance, while 32-year-old Smith is playing in New York for the sixth time in his career. Smith’s best US Open result is a quarterfinal run in 2017, while Saville is aiming to record a first win at the tournament.

Alex de Minaur (AUS)/Matt Reid (AUS) v John Millman (AUS)/Thiago Monteiro (BRA)
Men’s doubles, first round, Court 7, fourth match
At least one Australian winner in guaranteed in this first-round doubles match. This is 22-year-old De Minaur and 31-year-old Reid’s seventh Grand Slam appearance as a team and second in New York. They have a 5-6 career record together in major tournaments, only previously losing in the opening round once. Millman, a 32-year-old with a 1-3 career record in US Open doubles matches, enjoyed a career-best third-round run with 27-year-old Monteiro at the Australian Open earlier this year.

Marc Polmans (AUS)/Jurgen Melzer (AUT) v Jeremy Chardy (FRA)/Fabrice Martin (FRA)
Men’s doubles, first round, Court 5, fifth match
This is Polmans’ second appearance in a US Open doubles draw – and first since 2017. The 24-year-old from Melbourne, who has won three ATP Challenger doubles titles this season and is currently ranked No.97, is partnering Austrian veteran and world No.26 Melzer for the first time. The left-handed 40-year-old Melzer is a former US Open doubles champion, claiming the 2011 title. They play the experienced French combination of world No.55 Chardy and world No.37 Martin, who were Roland Garros 2019 finalists. This rain-delayed match resumes with the French team leading 6-3 1-2.

[16] Ellen Perez (AUS)/Kveta Peschke (CZE) v Ivana Jorovic (SRB)/Lesley Pattinama Kerkhove (NED)
Women’s doubles, first round, Court 14, fifth match
Since teaming up in August, 25-year-old Australian Perez and 46-year-old Czech Peschke have won five of their eight matches together. Peschke is a former world No.1 and a six-time doubles quarterfinalist at the US Open, while world No.46-ranked Perez’s best US Open result from two previous appearances is reaching the third round in 2019. Their first-round opponents are less experienced – this is 24-year-old Jorovic’s first US Open doubles appearance and 29-year-old Pattinama Kerkove’s second.