Volunteers and Clubs of the Month – July 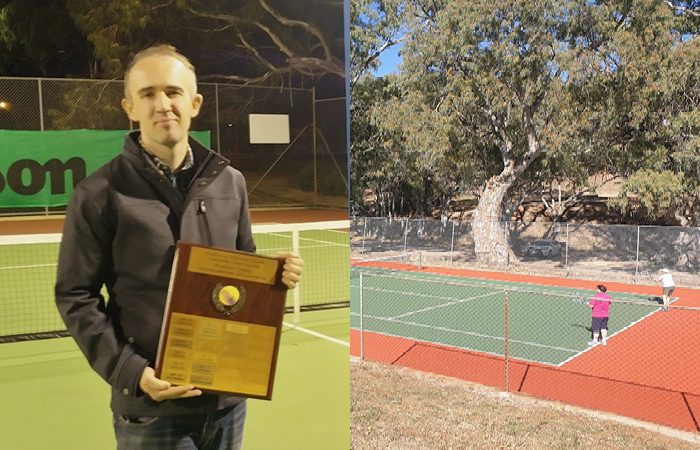 From nearly being vacated from Branson Reserve 12 years ago, Enfield Tennis Club has shown that it is willing to foster tennis and community on a site that it cherishes.

Recently, Enfield Tennis Club has taken big steps in improving its social tennis program over the past year. These improvements arose from the “Get Your Racquet On” program and picked up after the first COVID-19 shutdown with a variety of open court sessions. These sessions culminated in Enfield’s inaugural “Swiss pairings” doubles comp in summer 2021, an event which uncovered many new members and participants.

In the past year, Enfield Tennis Club has led a significant schedule of works on its facilities. These works include:

In addition to their recently improved facilities and amenities, Enfield Tennis Club has been in the middle of an impressive transformation for several years already. They have developed a social tennis schedule that is well received by their community, strengthened their relationships with elected representatives at all levels of government, attracted a major sponsor, and improved branding with a new logo, shirt design and website (using ClubSpark).

This work has been overseen by a remarkably young and savvy committee, who have ongoing ambitions to further develop their facilities and programs.

The culmination of several years of hard work by a devoted team and many dedicated volunteers is what makes Melrose Tennis Club what it is today.

Melrose Tennis Club have freshly resurfaced courts that were officially opened on Good Friday, with Court 2 being formally christened as ‘Shorty and Pinky’s Centre Court’. Kevin ‘Shorty’ Girdham was a life member and dedicated volunteer for many years, and Brian Pink was a long-time supporter of the club.

The resurfaced courts are now accompanied by newly installed shades around the court thanks to drought relief funding. These upgrades led to Club Secretary Helane Blieschke to now describe Melrose Tennis Club as “the most scenic tennis club in SA”.

Last season when COVID struck, Melrose Tennis Club had to unfortunately cancel their Easter Tournament after hosting it annually for 76 years. A disappointing result for the club, however they have big plans for 2022.

Keeping busy, Adam Kauschke currently resides as the Secretary for Enfield Tennis Club (since 2012), and the General Committee Member for North East Tennis Association (since 2019).

In his time at Enfield Tennis Club, Adam has been significant in the implementation and running of structured social tennis activities, including Get Your Racquet On and the inaugural “Swiss pairings” doubles competition.

He has also been key in securing several grants on behalf of Enfield; for projects including courtside shelters, Book a Court, and programs and equipment.

“I enjoy having a role in building the local community that I live in”, says Adam. “Tennis is our great game and I ultimately want it, and our club, to be centrepieces in a vibrant and rejuvenating Enfield.”

A Tennis Australia qualified coach since 2004, Cassie is committed to seeing the growth of the Association and increase participation numbers amongst the region’s younger players.

“I’ve loved watching the kids develop their skills as well as their growing love for the sport”, says Cassie, “it’s very rewarding to watch that process knowing you have had a hand in their development.”

A great supporter of modified programs, Cassie has enjoyed seeing youngsters at the start of their tennis journey and progress through to senior players within the Association.

Cassie would encourage everyone to have a go in a volunteer capacity at their local sporting club explaining that not only can you provide crucial assistance to organisation’s administration, but also gain valuable life skills.