Volunteers and Clubs of the Month – June 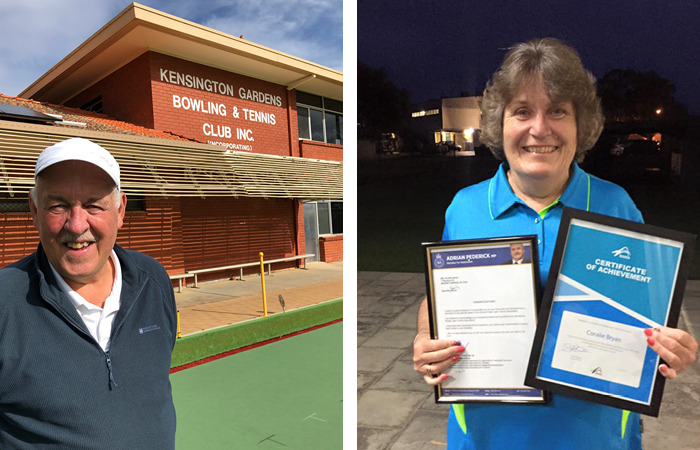 Coralie Bryan is a stalwart of the Murray Bridge Lawn Tennis Association, and has been described as the ‘mother’ of the tennis club where she currently resides as a life member.

2021 sees Coralie enter her 43rd year as the club’s Secretary. Although she hasn’t been active on the court for a little while now, Vice-President Anthony Lapinskas says that she still is down at the club every Saturday during the season to captain and look after both a junior team in the mornings and a senior team in the afternoons.

The club always speaks highly of Coralie, often describing her as “having the best interests of everyone else at heart, first and foremost, and she is willing to put her hand up to help out”.

Doug Larden’s role of President at Kensington Gardens Lawn Tennis Club is primarily one of strategic leadership, where he focuses on driving the future directions of the club. With the creation of ideas and development of innovative ways to achieve the vision and objectives, Doug’s role requires hands on facilitation and management of the Club.

The ‘downtime’ created by the closure of the club due to COVID-19 provided a perfect opportunity for Doug to begin the strategic transition, and put in place the mechanisms that would help to achieve the KPIs for membership growth, financial stability, program diversity and community access.

Many years ago, the club had the foresight to install lights on six of the lawn courts. This provided the club with a unique advantage as not many clubs around town could offer enthusiasts the option of ‘Lawn Tennis under Lights’. “Meeting the needs of the participants through an extremely competent coordinator and providing a format that promotes inclusivity were central to the success of night tennis which has seen an exponential growth in just one year”, Doug declares.

The club continues to grow in membership and enjoys an active social culture for all ages and abilities and prides itself on its family culture.

The club is now StarClub accredited (past 12 months) and has managed several exciting facility upgrades over time, making the club well known in South Australia.

Wednesday night social tennis during summer is always a hit, with the club cooking up dinner every other week which is always warmly welcomed.

The Club also has a vibrant volunteering culture with many hands chipping in on during tournament days and social nights to enhance participant experience and foster community culture. “One of the things I really enjoy is watching the recognition we give to our long serving volunteers with their life memberships as well as watching the facility upgrades come to life” says club Vice President Anthony Lapinskas.

The club in particular recognises Anthony Lapinskas, Graeme Buttle, Sherryn Crane, Coralie Bryan and Rob Butcher who have been long-term volunteers (among many) to the Murray Bridge Lawn Tennis Association.

Seacliff Tennis Club marks its 100th anniversary in 2021, celebrating the occasion with wins both on and off the court.

A couple of major events are scheduled towards the end of the year including a Family Fun Day on Sunday 24 October, and a Centenary Gala Dinner in November to commemorate the occasion.

The club have also developed centenary merchandise; a highlight being a selection of four SA wines and a port. These are labelled with a story relating to the Club’s history and wines named after its four court locations during that time; Kauri Cabernet, Maitland Square Shiraz, Aboyne Avenue Shiraz and the Sandpit Classic White. If anyone is interested in getting their hands on the commemorative merchandise, these are available for purchase via their website.

On the court, Seacliff TC has achieved tremendous success during its centenary season, winning premiership crowns in both Junior State League and State League (Mens).

All in all, 2021 is shaping up to be a tremendously exciting year for Seacliff Tennis Club.