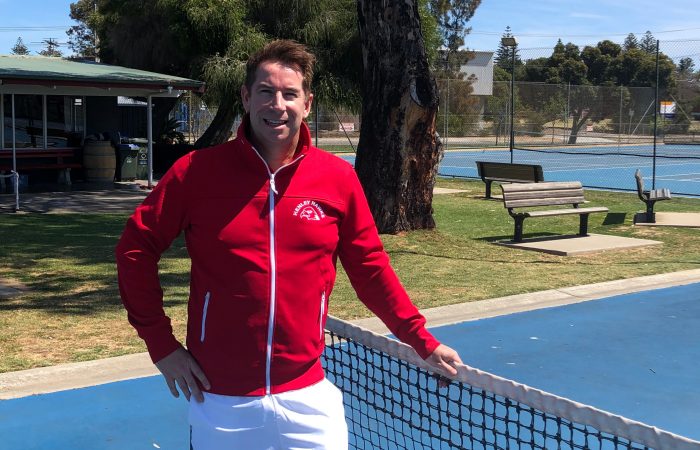 When Darren Wunderer first became active with Henley South Tennis Club in metropolitan Adelaide some 30 years ago, it’s doubtful he could imagine the long journey ahead. It’s equally unlikely that the talented young player, who’d committed to tennis after first participating in cricket and football, would realise that his biggest service would ultimately come off the court.

Within a few years of joining the club committee in 1992, Wunderer became the youngest President in the club’s long history at age 22.

“We didn’t know when we got there but the club had lost a core group of players and committee members,” said the South Australian, who first played at Henley South with his brother as a teenager. “So it wasn’t long before I offered to get involved and encouraged a number of friends to join. I guess the rest is history.”

That history includes many new highs for both Henley South and the dedicated volunteer. Having donated his time to everything from organising social activities to securing critical facility upgrades, Wunderer has helped the 10-court club becoming one of the nation’s most thriving tennis communities.

Wunderer’s individual honours are equally profound. The recipient of Tennis SA’s Volunteer Achievement Award in 2019, the South Australian was also honoured at national level at the Australian Tennis Awards.

“I’m really proud that we’ve built the club up from when I first started back in the 90s, to a really strong powerful club, with a great culture,” said Wunderer on accepting the Volunteer Achievement Award from fellow South Australian John Fitzgerald last year. “(There are) lots of families, a fantastic committee and lots of young people involved.”

Such a community focus is critical for the hard-working Wunderer, who was initially driven by the clear need he recognised at his local club. With a “personal belief in liking things to be done as well as possible” as another motivator, Wunderer’s passion to contribute has grown with time.

“Over the years I guess it’s got a bit bigger picture, playing my part in ensuring the continued success of grassroots tennis in metro Adelaide,” he explained.

Wunderer carries that outlook into another volunteering role as President of the Western Districts Tennis Association, where he is supported by a progressive team.

“We’ve got a great team that I work closely with, to ensure that not just my club but also the other clubs in the district continue to be sustainable and have a good competition to play in,” he said.

While multiple volunteering commitments create a busy lifestyle, Wunderer firmly believes that any challenges are balanced by the multitude of rewards.

“Being out of your comfort zone is a good challenge to have,” he said, noting the deep connections he’s developed in the sport.

“Giving back to the local community and having a lot of fun is important, seeing how much people enjoy coming or just playing tennis in general. I’ve learned a lot of new skills over the years, but I guess the main reward is being involved in the sport you’re most passionate about.”

Volunteering has also helped the South Australian develop skills that support him in other areas of life.

“It has helped me a lot with my work – especially leadership and teamwork and getting people involved,” noted Wunderer, who is a Team Manager and Senior Relationships Manager with Statewide Super in South Australia.

“A big one for me is compassion and respect, and listening, gaining and sharing your knowledge. Communicating with a variety of people – kids, adults, parents and coaches – and just being willing to pitch in and help, and trying to share that value with others.”

All of those skills are equally helpful as Wunderer tackles another passion – to ensure that the culture of volunteering in tennis remains strong.

“They’re essential to the Australian tennis community, particularly at club and local level,” said Wunderer. “Volunteer Week is a great opportunity to thank and acknowledge all the fantastic and dedicated volunteers involved in tennis across the country. They play a huge part in the success of tennis, particularly at clubs and grassroots level.”

Quick to note that he is just one of thousands of committed volunteers throughout the nation, Wunderer is equally keen that others experience the many rewards of becoming involved.

“I would highly recommend that people get involved in their local club or community,” he said.

“Just remember that volunteers come in all shapes and sizes. You get way more back than what you put in.”