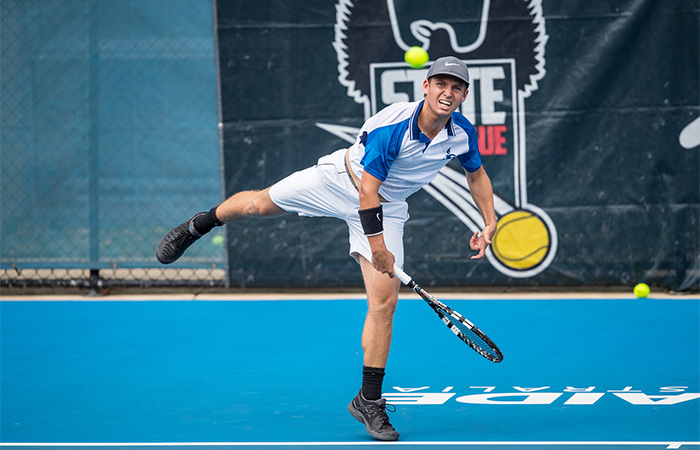 In round 5 of State League Glenlea moved into second place after a strong 6 rubbers to 0 win over Seacliff. Edward Winter, Jack Schipanski and Josh Boots started well for Glenlea with all three recording strong singles victories. Toby Radford also came from a set down to defeat Declan Laginestra in 3 sets to give Glenlea an unassailable lead. From there Glenlea were able to comfortably win both doubles to round out their dominant victory.

In the match of the round Coromandel Valley defeated top of the table Trinity Gardens by a singular game to capture their second win of the season. Trinity started well with Callum Gale and Andrew Tavella both winning their singles to give Trinity the early lead. Sam Sanderson was able to hit back for Coromandel and after Rhys Kelly was able to defeat Scott Hughes in 3 sets, the match was level heading into doubles. Although Trinity was able to win the first doubles on a tie break, Coromandel’s victory in the second doubles ensured that they won the match by the barest of margins.

In the State League Women’s competition EAP had a dominant 6 rubbers to 0 win over Seaside to confirm their place at the top of the State League Women’s table. EAP were utterly dominant in the singles with Amber Marshall, Andrea Kristo, Juliette Robinson and Elim Yan all winning convincingly. This continued into the doubles with EAP winning both well to wrap up the strong overall performance.

Glenlea were able to notch their second successive win of the season with a 4 rubbers to 2 win over Denman. Glenlea jumped out of the blocks winning the first 3 singles matches through Jennifer Elie, Mia Toukalas and Marie Bonnin. Jacqui Scott was able to strike back for Denman, however with both team capturing a doubles match each, Glenlea were able to hold on for the win.

Kingswood responded well after their defeat last week with a dominant 6 rubbers to 0 win over Seaside. Jasmine Adams and Nicole Kraemer started the day off well for Kingswood both recording strong wins. Cydney Crumbie was able to get past Georgia Plunkett in an incredibly close match before Vittoria Peresano won the final singles for Kingswood. Heading into doubles Kingswood were able to carry on their momentum winning both doubles to complete their dominant victory.