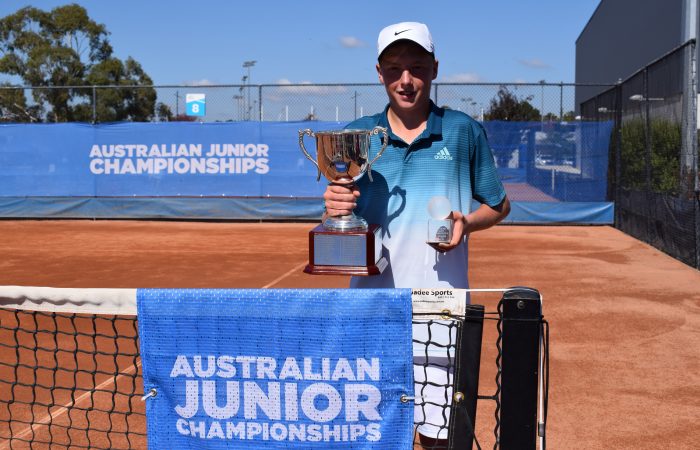 The 2019 12/u and 14/u Australian Claycourt Championships have concluded today with the national champions crowned at the Canberra Tennis Centre.

In the 12-and-under championships, top seed, Gloria Jovic (NSW) claimed the girl’s title defeating Mahi Khore (Vic) 6-3 6-1, while second seed Hayden Jones (Qld) was too strong for third seed Gautham Santhosh (Qld), winning 6-4 6-4.  Both Jovic and Jones were in solid form all week, with neither player dropping a set throughout the tournament.

Winter claimed both the singles and doubles, with the victory especially sweet after falling in the finals of the same event in 2018.

“I am really pleased with my effort this week and it’s really exciting,” Winter said.

“It was a really tough loss last year, so it’s good to finally get the win in another three set match.”

The 14-year-old will focus on improving his game in 2019 with his sights set on the junior events at Australian Open 2020.

“I would probably like to play Australian Open juniors main draw next year which would be my main goal,” Winter continued.

It was a special week for Jovic who also claimed the doubles title with Yelena Kelleher (WA).

“I have always dreamt of winning a nationals and it is really amazing that my dreams have come true,” Jovic said.

“It feels amazing to be on the same trophy as her [Ashleigh Barty].

“I would like to be the best tennis player I can be, and number one in the world, and win lots of Grand Slams,” Jovic continued.

“The quality of tennis we have seen over the past week has been outstanding.  It is great to see Australia’s best juniors come together and compete so well, while also displaying outstanding sportsmanship,” Tournament Director Mark Pead said.

“The overall event has been a huge success and I’d like to thank the players, parents, staff and coaches for their support,” Pead added.