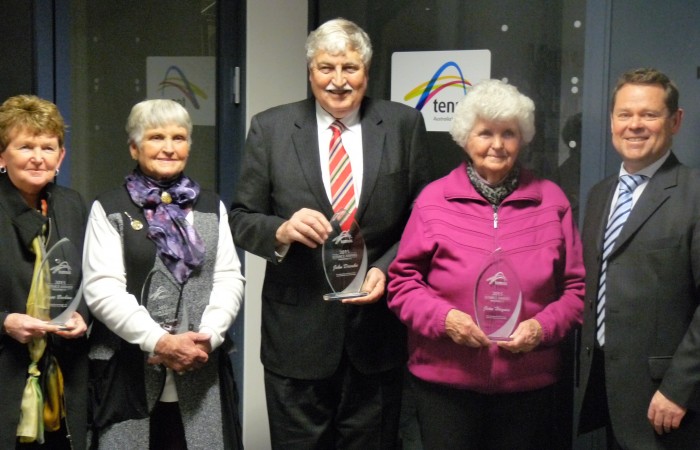 Earlier this week a small and casual function was held at Tennis SA, to award four special people with a Tennis SA Service Award.

Joyce Buchan you have worked for the good of tennis in South Australia for over 30 years and during this time you have always been an enthusiastic and highly professional leader in the SA Tennis community. You have brought to tennis a remarkable set of skills that have been further honed and developed in the many roles you have undertaken for the betterment of the game in South Australia.

These roles have included your work as NETA delegate to Tennis SA Council for 19 years of continuous service, your role as Association Secretary for NETA and one of its predecessor associations from 1985 as well as service to the SAHCTL in a variety of roles including as a member of the Executive, the amalgamation committee, the Junior Tournament committee and as score steward for the SAHCTL Winter Pennant competition.

Joyce Buchan your long-term, continuous, high-level professional commitment to tennis in South Australia is truly meritorious. Your contribution to tennis administration has been outstanding and you are a most worthy recipient for the Tennis SA Service Award.

June Raven you have been involved with the game of tennis since you first hit a ball at Hope Ward Tennis Club in 1956. Since this time you have made a significant and very tangible contribution to the game of tennis in South Australia. This has always been done with concern for the game and for those who play our great game.

You have worked assiduously as an administrator of the game at club, association and state level where you have acted in roles as a committee member, secretary, treasurer and president. You have represented your club and association at SAHCTL and Tennis SA Council meetings and been a member of both the Winter Pennant and Senior Activities Committees and actively promoted the game as an administrator and correspondent for the SA Tennis News from 1981 – 1996.

June Raven your willingness to contribute to the game of tennis in South Australia has been valued by everyone who knows and has worked with you. The important guidance and counsel you now provide as a Life Member of your club and experienced volunteer administrator of the game in South Australia makes you a worthy recipient of the Tennis SA Service Award.

John Daenke, Tennis SA and our predecessor organisation SATA, has enjoyed a long and fruitful professional relationship with you for over 33 years as our Honorary Solicitor. During this time you have assisted with the amalgamation of SATA and the SAHCTL as well as the preparation of a number of constitutions, contracts, advice on member protection issues, the appeals committee, lease arrangements as well as advice for members and the organisation. Your work has always been characterised by a disciplined and thoughtful approach to all matters with your wise counsel greatly appreciated by successive Boards and Councils.

John Daenke your continuous and high level of professional commitment to tennis is South Australia at the local, association and state levels is commendable. You are a worthy recipient of the honour of the Tennis SA Service Award.

Jean Haynes, you have worked to promote and administer tennis in South Australia for over 40 years and during this time you have contributed significantly to the game through your diligence and hard work on a variety committees and in numerous roles. You have positively impacted on both association and state tennis through your work on the Tennis SA/SAHCTL Winter Pennant committee for 41 years, your role as a committee member and Secretary of Millswood Lawn Tennis for 33 years, a member of the Glenelg District Tennis Association for 30 years and a member, Treasurer and President of Ascot Park/Vermont Tennis Club for over 50 years.

Jean Haynes your unremitting work for the tennis community in South Australia has enabled our sport to become strong and well respected. Your contribution as a volunteer to tennis administration has been exceptional and you are a most worthy recipient for the Tennis SA Service Award.