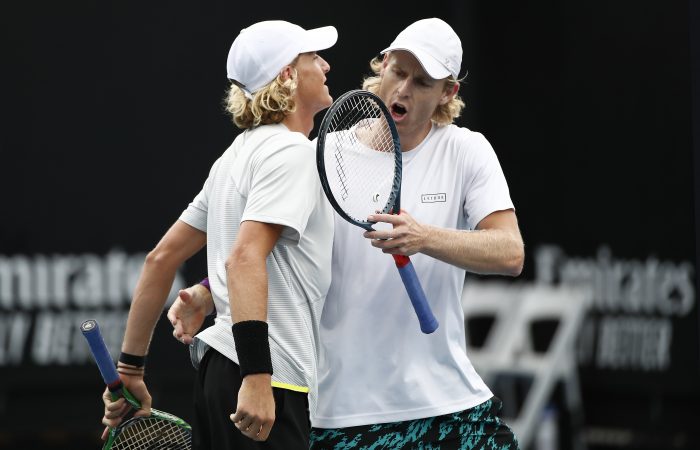 Aussie duo Luke Saville and Max Purcell enjoyed a sensational run to the Australian Open 2020 men’s doubles final – and they have their sights set on going one better this year.

“Defending the final, it’s going to be tough. And there’s more expectations of course – we’re not wildcards this year, we’re direct acceptances and seeded. But that doesn’t change much when you get out on court.”

Saville described their Australian Open result last year as ‘enormous’. The breakthrough made them the first all-Australian team to make an AO men’s doubles final since Todd Woodbridge and Mark Woodforde in 1998.

They proved it was no fluke run either. Both set career-high rankings inside the world’s top 40 in 2020. They also reached an ATP final in Kazakhstan in November and were alternates for the ATP Finals as the 10th best-performing team of the season.

Saville is determined not to let this success provide added pressure at Melbourne Park this summer.

“We feel like our level is improving and we definitely belong,” the 27-year-old said.

“Even though there’s a few more expectations, we’re just going to go out there and enjoy ourselves. We get along well and that’s really all there is to it. We’ll just go out there and compete.”

The 15th-seeded pair of Purcell and Saville are one of nine teams featuring Australian players in the Australian Open 2021 men’s doubles draw.

John Peers, the AO 2017 champion, is partnering New Zealand’s Michael Venus, while Nick Kyrgios and Thanasi Kokkinakis are teaming up at a Grand Slam for the first time since 2015.

“I can’t wait to get out and play some doubles with him,” Kokkinakis said of partnering his good friend.