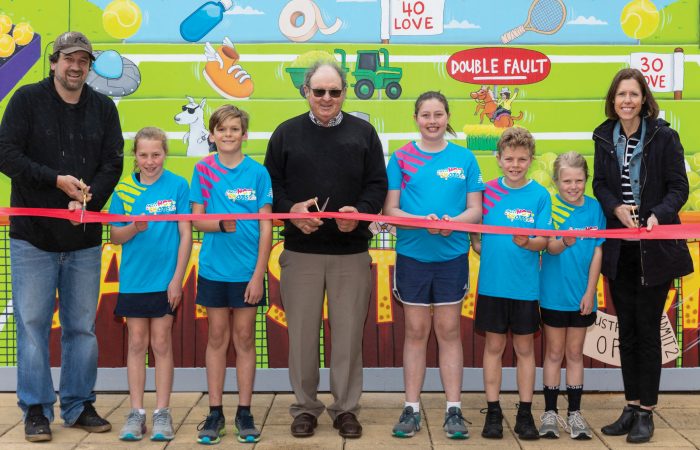 A striking art mural at Memorial Park Tennis Complex in Bordertown has been launched today as part of a collaborative project with Tennis Australia which has seen the reimagining of hitting walls across the country, an initiative designed to increase community participation and engagement in tennis.

The artwork and concept was led by renowned Mount Gambier-based artist Anthony Hamilton, known for his quirky, colourful, cartoon anime style. The two-sided mural features a solar system theme on one side, with a Bordertown Show theme on the other, both incorporating targets for participants to aim at. The Hitting Wall is open to the public and is set to become a feature at the tennis complex for locals and tourists alike.

“The hitting wall was constructed about 15 years ago. When I saw some photos of the mural a fortnight ago and I couldn’t believe my eyes, it was like Christmas had come,” Memorial Park Tennis Complex President Chris Steer said.

“I learnt how to play tennis hitting against a wall, so I was absolutely delighted when I saw it. It’s a great attraction for the kids.”

“I love the solar system side and the little sign at the bottom saying ‘not to scale’, I thought that was a beautiful touch!”

“It’s been an amazing project to be a part of. I can’t believe the difference it has made. It was just a blue, boring wall and now it’s so bright, the kids haven’t stopped using it,” Tatiara Junior Tennis Association representative Rachel McLellan said.

“I do hope that it will attract people down to our facility, the wall is open to everyone in our community. The best thing about a hitting wall is that you can play by yourself or you can play with your family.”