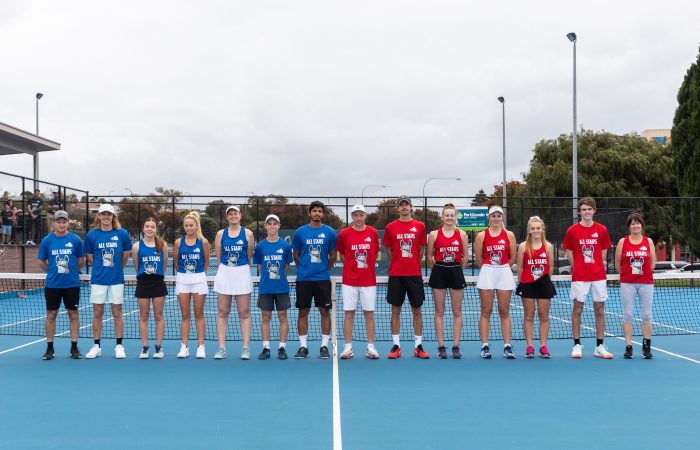 The match came down to the wire with the teams locked at five rubbers a piece at the conclusion of play with a countback required to determine the winner. Team Blue eventually emerged victorious with nine sets to seven.

Players also participated in a Family Fun Day, along with tourism activities including swimming with the sea lions with Calypso Star Charters, an Experience Coffin Bay Oyster Farm Tour and a visit to Beer Garden Brewing for lunch.

“The atmosphere on court was insane, there was a huge crowd and the support from the local community really spurred us on.

“It was also great to be able to explore the region and really experience all that Port Lincoln has to offer,” Evans continued.

“The weekend was so much fun. It was great to go to Port Lincoln for the first time, meet new people and have the support of a great crowd,” Tennis SA State League All Star Sean Van Rensburg said.

“I received a message from a parent on social media after the Family Fun Day to say thank you for playing tennis with and inspiring her son. It was great to hear the impact we have left on the local community in such a short amount of time.”

“It was such a fun event to be a part of and I really enjoyed my time exploring the Eyre Peninsula,” Van Rensburg added.

“We had a wonderful team of All Stars who really immersed themselves in the experience and connected with the local community. The feedback has been nothing but positive.

“Our sincere thanks to the City of Port Lincoln, Port Lincoln Tennis Association and Elderton Wines for their generous support of this event.

“We hope that this is just the beginning and we look forward to bringing the All Stars to regions around South Australia in years to come.”