Volunteer and Club of the Month – May 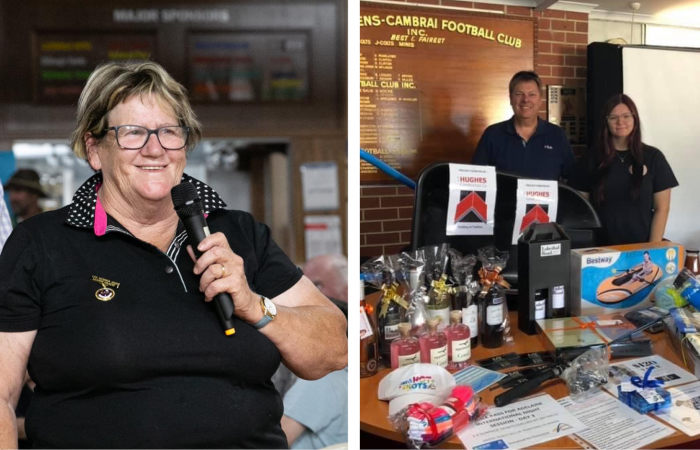 METRO CLUB OF THE MONTH

The staff have worked tirelessly to get the club up and running from scratch after a few inactive years. Since then, Mt Torrens Bombers Tennis Club have seen 2 senior teams into the TVTA competition, raised money for court resurfacing, new club rooms, promotion of the club, recruiting for the upcoming season as well as promoting local businesses, clubs and artists.

The club have worked with Tennis SA and the entire community to organize the Rally As One tennis day for the area affected by the Cudlee Creek Bushfires in support of local businesses.

The club would like to recognise the hard work from Glenn Miller, Rebecca Miller, John Pym and Alice Pym.

REGIONAL CLUB OF THE MONTH

Normanville Tennis Club have been a finalist in the Tennis SA Awards for the past two years and for a small rural club, they continue to grow participation in the region.

The club has witnessed an ongoing successful Community Play program for children in the region which has grown year on year with volunteer Leigh Howlett (former Tennis SA Rural Volunteer of the Year winner).

Normanville Tennis Club have recently introduced squad training throughout the winter months (no competitive season, first time any tennis offered in winter!) with former Australian pro tennis player, Michael Waite (interestingly, Michael, who has lived in the United States for quite some time, and even ran for Washington State Treasurer and although he didn’t win, received more than 1 million votes!). This has meant the club has been able to provide quality engagement opportunities for all their junior members regardless of their abilities. This assist in retaining players and provides them with a pathway to higher divisions.

The club would like to recognise the hard work from The Krichauff Family – Michael (President) and Paula (Treasurer), Courtney Burgess (Junior Coordinator and past Secretary), Leigh Howlett and Michael Waite.

METRO VOLUNTEER OF THE MONTH

Rebecca Miller has been involved with both Mt Torrens Bombers Tennis Club and Torrens Valley Tennis Association as the Secretary, on and off for around 20 years.

Rebecca has contributed some major achievements to the club, including:

Rebecca believes that volunteers are what keeps clubs going, and that every little bit of help contributes to keep to the club going.

“Help out your local community and teams or they won’t exist!” says Rebecca,

“our original club closed due to problems out of our control and it has been a lot of working building the club up again from scratch”.

REGIONAL VOLUNTEER OF THE MONTH

Leanne Graetz has been involved in Lucindale Tennis Club and Southern Ports Tennis Association for 45 years, where she has held committee roles such as President and Vice President, and more recently has been awarded life membership at both clubs!

She has been competing in and representing the Lucindale Tennis Club and the Southern Ports Tennis Association for many years in inter-association tournaments such as the Baker Shield and Country Carnival, Veterans events, Masters Games, and is notably a 2010 Sydney World Masters Gold and Silver medalist!

Leanne is well known for her continued passion and advocacy for the game, and fierce passion and promotion of the annual Lucindale Easter Tournament.

“Leanne does not go anywhere without a stack of flyers to distribute and advertise our events to everyone she meets. It is this enthusiasm that has seen entrants from as far and wide as Sydney and Perth at the Lucindale Easter Tournament” says close friend and fellow member Eliza Handbury.

Eliza continues, “Leanne is also always encouraging and promoting the club, a new person to town would rarely make it out of the deli without Leanne asking if they play tennis, or would like to.”