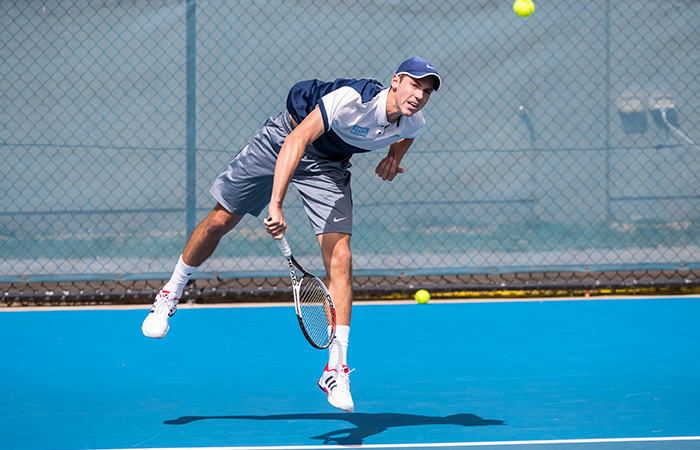 In round 6 of State League second placed Glenlea recorded a narrow 1 set win over against top of the ladder Trinity Gardens. Trinity started strong with Callum Gale and Adam Alessandrini winning their singles well before Jack Schipanski struck back for Glenlea. However, Glenlea looked in deep trouble after Charles Nicholas defeated Toby Radford in 3 sets to give Trinity a 3 rubbers to 1 advantage leading into doubles. From there though it was all Glenlea with two huge doubles wins to secure the game.

East Adelaide Kings won their third successive match after a 5 rubbers to 1 win over The Drive. Li Tu started the day off well for the Kings with a strong singles win before Kiichi Ishida struck back for The Drive with a strong win of his own. Alexander Despoja and James Calder were then able to win their singles in 3 sets to put East Adelaide in a dominant position heading into doubles. The Kings were then able to see off their opponents winning both comfortably to move into third on the State League ladder.

Broadview bounced back from their defeat last week defeating Tea Tree Gully in a convincing 5 rubbers to 1 win. The match was a lot closer than the score would indicate with Nathan Eshmade and Corey Decandia for Broadview and Tyson Devine for Tea Tree Gully winning their singles in 3 sets. Following a strong win from Martin Richards Broadview were able to execute in doubles winning both comfortably to ensure the victory.

Coromandel Valley also continued their winning streak extending it to 3 matches following their 4 rubbers to 2 win over Seacliff. Mislav Bosnjak started the day off well for Seacliff with a tight singles victory before Stefan Bianchet levelled things up for Coromandel with a strong singles victory. From there Noah Koeroessy for Seacliff and Patrick Douglas for Coromandel were both able to win their singles to ensure the match was level heading into doubles. Two tight doubles wins including one which went to a tie-break was enough to give Coromandel the win in an incredibly tight contest.

In the State League Women’s competition Kingswood had a dominant 5 rubbers to 1 win against EAP to leapfrog them and put them at the top of the State League ladder. Jasmine Adams, Nicole Kraemer and Cydney Crumbie were able to give Kingswood the early lead with all three winning their singles with Cydney’s win over Juliette Robinson going a to a close third set. Elim Yan was able to put EAP on the board following a strong singles performance. However, Kingswood were able to steady and win both doubles to confirm their place as the team to beat this season.

Glenlea were able to continue their winning streak to 3 consecutive matches with a 4 rubbers to 2 win over The Drive. The day started well for Glenlea with Olivia Ley and Mia Tsoukalas both winning their singles in incredibly tight 3 set matches. Marie Bonnin was able to win her singles comfortably to put Glenlea in a dominant position before Skye Vandeleur was able to strike back for The Drive to give them the sniff of a comeback. However, this would not be the case as doubles were split a rubber apiece to secure the win for Glenlea.

Seaside responded well after their defeat last week with a strong 5 rubbers to 1 win over Denman. Seaside started well winning the first three singles with Madison Schwarz coming from a set down to defeat Ebony Harper. Denman were able to capture the final single through Jessica Glavas but were not strong enough to comeback with Seaside winning both doubles to complete their dominant performance.