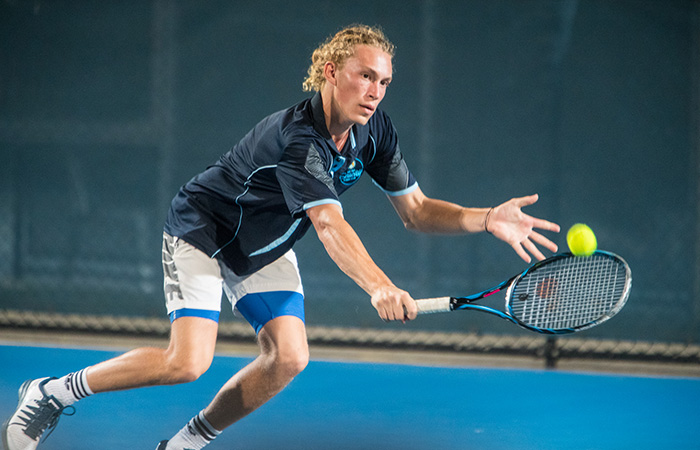 In round 2 of the Junior State League boys, Seacliff continued their strong start to the season with a convincing 6 sets to 0 win over Woodville Orion. Number 1 Lachlan Brain overcame Alex Carroll in a tough 9-8 victory before dominant performances from Noah Koeroessy, Hamish Bartos and Angus Koeroessy ensured a Seacliff victory.

Coromandel Valley remain undefeated after a 5 sets to 1 victory over EAP Saints. Edward Winter started strong with a 9-1 win. This was followed by two very close victories for Coromandel with Patrick Douglas winning 9-7 and Luke Mascione 9-8. Going into doubles 4 sets to 0, matches were split with EAP’s Hemang Gaur and Noah Coghlan winning a tight doubles 7-6.

Trinity Titans were able to bounce back from their defeat last week to register their first win of the season with a 4 sets to 2 victory over Seaside. The singles were split 2-2 with Callum and Jude Gale both recording strong wins for Trinity while Doni Gashi and Jobe Norris both won close games to keep Seaside in the match. When it came to doubles however Trinity were too strong and were able to win both matches 6-4 and 7-5 to clinch the match.

Tod St/Collingrove also won their first match of the season with a 5 sets to 1 win over Peake Gardens. Tod St/Collingrove were incredibly strong in the singles winning all four matches. With Kristo Daminato winning 9-1 and being well supported by Dylan Truong, Mason Pike and Anton Putzer. In the doubles Kristo and Dylan were able to win comfortably 6-0 while Peake Gardens were able to strike back in the second doubles with Kai Tucker and Oliver Thoeny winning 6-0.

In the Girl’s competition EAP Saints continued their good start to the new season with a 6 sets to 0 win over Happy Valley. Elim Yan got EAP off to an ideal start with a 9-6 win over Heidi Evans. EAP were then able to win the other singles relatively comfortable with strong performances D’Estree Colalancia and Ashelle Shields who won 9-0 and 9-1 respectively. EAP consolidated in the doubles winning 7-5 and 6-1 to ensure they remained undefeated.

Seacliff also remain undefeated after a dominant victory this time over Glenlea winning 6 sets to 0. Cydney Crumbie and Georgia Plunkett got Seacliff off to a great start winning both their singles 9-2. Ebony Harper and Kate Martin secured the victory for Seacliff winning their singles 9-3 and 9-5 respectively. Seacliff were then able to win both doubles 6-2 to complete a very strong overall performance.

Seacliff were once again too strong winning 6 sets 0 over Peake Gardens and yet to drop a set in the first 2 rounds. Jasmine Adams had another strong win beating Mia Tsoukalas 9-4. Peake Gardens struggled to get into the game with all 3 other singles going down convincingly. We are only 2 rounds in but Seacliff seem to be the team to beat for this season.