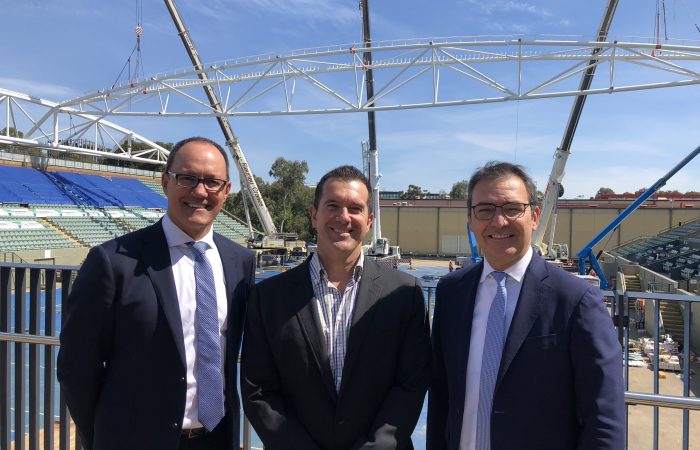 In a major step for the redevelopment of Memorial Drive, installation of the first north-south canoe trusses has commenced.

Each of the six canoe trusses is made up of three components, weighs 50 tonne and is 78.5 metres in length.

The achievement follows the installation of the Northern and Southern Transfer Trusses late last week. Nine of 24 pieces of the roof are now on site, with the remaining 15 pieces to be transported to the site over the coming months.

Minister for Sport and Recreation, Corey Wingard said the instalment was a significant milestone for the project, which will be finished ahead of the Adelaide International event in January 2020.

“This is a direct result of the Marshall Government’s $10 million investment in the redevelopment of the Memorial Drive sporting precinct, which I’m certain will attract even more superstar tennis players to South Australia well into the future.

“As well as international stars playing at the new and improved Memorial Drive, the new roof will also allow for the year-round training of the state’s tennis talent, as well as for use by community groups with access to Memorial Drive.

Tennis SA CEO Steven Baldas said the installation was an exciting step forward for the project.

“We are thrilled to see the roof starting to take shape over Memorial Drive,” Mr Baldas said.

“The redevelopment of Memorial Drive changes the landscape of tennis in South Australia.

“We have a long tennis history in Adelaide and the upgrades to this facility will not only enable tennis to be played year-round, but also puts us in an event ready position for the Adelaide International in January 2020.”

The Memorial Drive Centre Court redevelopment project will include:

Completion of the entire roof is expected in mid-December ready for the Adelaide International, 12-18 January 2020.