Sod turned at Memorial Drive for construction of redevelopment stage one 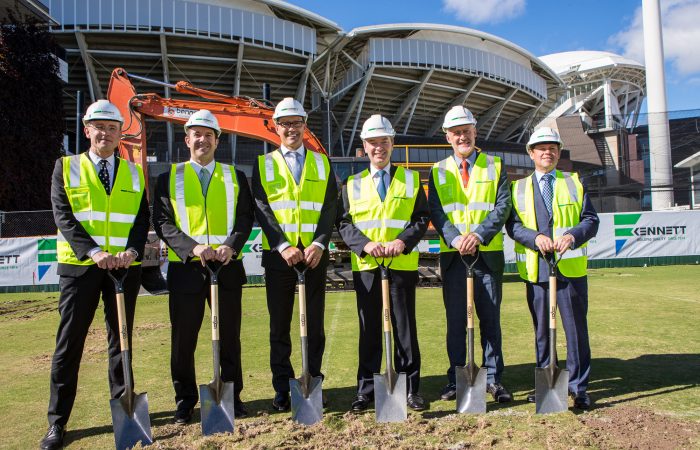 Mr Pyne, along with Hon Corey Wingard MP, Minister for Recreation, Sport and Racing, Lord Mayor of Adelaide Martin Haese and South Australian tennis legend John Fitzgerald, were present to turn the sod on the $9.79 million project set to revamp the Memorial Drive sporting precinct and ensure the heritage of Memorial Drive is retained for years to come.

“This first stage will help to continue the proud history of Memorial Drive and will ensure more people are playing tennis more often by increasing the number of high-quality courts available in the city,” Mr Pyne said.

“Not only will this bring more tennis to this great city, but it will also serve as an entertainment hub for the city.”

“The construction of the first stage is excellent news for the City of Adelaide and adds to the recent developments in the Riverbank Precinct,” said the Lord Mayor.

“The City of Adelaide is delighted to be a part of this project and thank the Memorial Drive Tennis Club, Next Generation Memorial Drive, Adelaide Oval and Tennis SA for their collaborative approach, along with the Federal government for its $9.79 million funding commitment.”

Tennis SA CEO Steven Baldas described the turning of the sod as an exciting day for South Australian tennis.

“It will also provide state-of-the-art facilities for the next generation of tennis players to be able to train on all three Grand Slam surfaces allowing us to continue our proud legacy of producing world-class players such as Lleyton Hewitt, Mark Woodforde, Thanasi Kokkinakis, Alicia Molik, Darren Cahill and John Fitzgerald.”

“The completion of stage one will also make us ready to begin stage two, the redevelopment of our centre court stadium, enabling us to go after world-class events such as Davis and Fed Cup home ties as well as other international standard professional events.” Mr Baldas continued.

Kennett Builders will begin construction of stage one this week, with completion expected in early 2019.