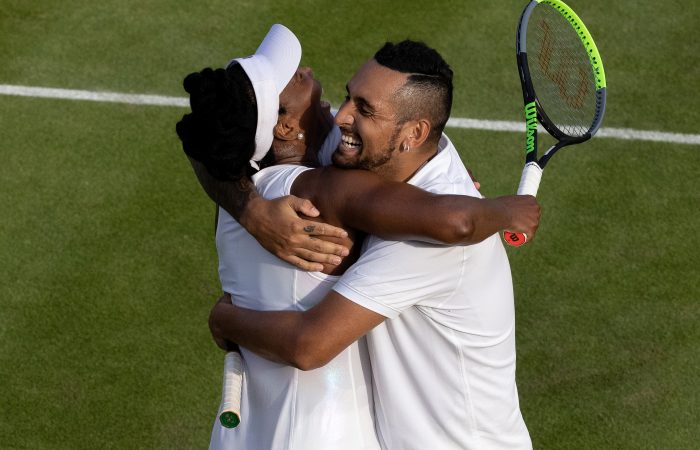 Nick Kyrgios predicted that he and Venus Williams could prove a dangerous team in the mixed doubles competition at Wimbledon 2021 – and after the wildcards scored a first-round win, that appears true.

Playing together for the first time, the 26-year-old Australian and 41-year-old American recorded a 6-3 3-6 7-5 victory against American duo Austin Krajicek and Sabrina Santamaria.

Combining to hit 18 winners in their one-hour and 55-minute victory, Kyrgios and Williams move into a second-round showdown with fourth seeds Edouard Roger-Vasselin of France and American Nicole Melichar.

“Definitely today I felt a bit of pressure playing with Venus,” Kyrgios said.

“It was just a lot of fun. She’s iconic to the sport and she’s an absolute legend. She’ll go down as one of the greatest players ever to pick up a racquet when it’s all said and done.”

Kyrgios was among eight Australian players to score wins in day-five action at the All England Club.

Purcell recorded a victory in the gentlemen’s doubles competition too. Partnering Luke Saville, the No.16 seeds posted a hard-fought 3-6 7-6(4) 6-4 win against fellow all-Australian combination John Peers and Jordan Thompson.

In ladies’ doubles action, Storm Sanders was the sole Australian winner of the day.