Strength in numbers as Australian players shine at Wimbledon

There are 15 Australians competing on day five at Wimbledon 2021, highlighting the remarkable depth in Australian tennis right now. 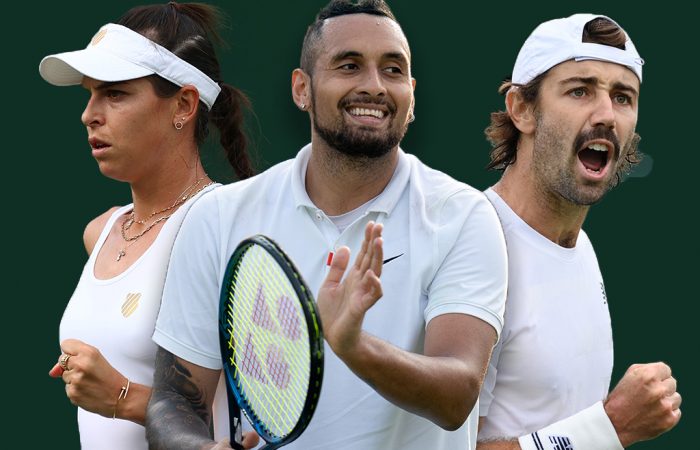 Australian tennis fans have had lots to cheer about at Wimbledon this week, with five Aussie players advancing to the third round in the singles draw.

“The future looks bright. I don’t think there’s too much going wrong with the Aussies,” Jordan Thompson declared after defeating former world No.4 Kei Nishikori in four sets yesterday.

The strength in numbers is also evident in the doubles competition, with 15 Australian players scheduled to compete on day five. This includes Thompson, who is teaming with Davis Cup team-mate and world No.24 John Peers in the gentlemen’s doubles competition.

Alexei Popyrin (AUS)/Lloyd Harris (RSA) v Austin Krajicek (USA)/Tennys Sandgren (USA)
Gentlemen’s doubles, first round, Court 8, first match (from 8pm AEST)
Popyrin and 24-year-old South African Harris, who are both enjoying career-best seasons in singles, are making their Wimbledon doubles debut. Teaming up for a first time, they face an all-American combination. The 31-year-old Krajicek is ranked No.51, while 29-year-old Sandgren is a former US Open doubles quarterfinalist. Popyrin is looking to improve a 2-4 career win-loss record in Grand Slam doubles matches.

Sam Stosur (AUS)/Coco Vandeweghe (USA) v Anna Kalinskaya (RUS)/Yulia Putintseva (KAZ)
Ladies’ doubles, first round, Court 5, second match
Stosur, a former world No.1 in doubles, is a three-time ladies’ doubles finalist at Wimbledon. The 37-year-old is partnering big-serving Vandeweghe, a 29-year-old who won the US Open 2018 doubles title with Ash Barty. They are yet to win a match in two previous tournaments together, but have a clear edge in Grand Slam experience against 22-year-old Kalinskaya and 26-year-old Putintseva.

[16] Max Purcell (AUS)/Luke Saville (AUS) v John Peers (AUS)/Jordan Thompson (AUS)
Gentlemen’s doubles, first round, Court 10, second match
The draw has unkindly pitted Australia’s top-three ranked doubles players against each other in the opening round. World No.24 Peers, who is teaming with No.247-ranked Davis Cup team-mate Thompson, plays No.32-ranked Saville and No.43 Purcell. The latter are Australian Open 2020 finalists and are competing at Wimbledon for a second time – after sneaking into the 2019 draw as alternates, they are seeded this year. Peers, a Wimbledon finalist in 2015, is competing for a ninth time, while Thompson is unbeaten in first-round doubles matches from his three previous appearances.

Arina Rodionova (AUS)/Zarina Diyas (KAZ) v Varvara Gracheva (RUS)/Oksana Kalashnikova (GEO)
Ladies’ doubles, second round, Court 14, second match
After eliminating the No.2 seeds in the opening round, 31-year-old Rodionova and Diyas are aiming to continue their winning run. Rodionova, who is ranked No.82, has a 0-5 win-loss record in second-round doubles matches at the All England Club. Is this the year she reaches the third round for a first time? If she does, it would be her best Grand Slam doubles result since a quarterfinal run at Australian Open 2016.

Storm Sanders (AUS)/Caroline Dolehide (USA) v Kaja Juvan (SLO)/Ann Li (USA)
Ladies’ doubles, first round, Court 6, third match
In their first tournament together last month, 26-year-old Sanders and 22-year-old Dolehide made a WTA final at Nottingham. With their confidence high, they will fancy their chances against the first-time combination of Juvan and Li, who typically focus on singles. Sanders, ranked at a career-high No.59, is contesting Wimbledon for a third time, while No.40-ranked Dolehide is making her debut.

Ajla Tomljanovic (AUS)/Christina McHale (USA) v Kaitlyn Christian (USA)/Nao Hibino (JPN)
Ladies’ doubles, first round, Court 9, third match
Making her fifth appearance in a Wimbledon doubles draw, 28-year-old Tomljanovic is partnering 29-year-old McHale for the first time at tour-level since 2015. The reunited duo, who previously teamed up at Wimbledon in 2014, play recent Nottingham quarterfinalists Christian, ranked No.61, and No.64-ranked Hibino. Tomljanovic, who is ranked No.117 in doubles, is aiming to progress to the second round for a third time.

John-Patrick Smith (AUS)/Caty McNally (USA) v Andrei Vasilevski (BLR)/Arina Rodionova (AUS)
Mixed doubles, first round, Court 14, fourth match
Smith, a former Australian Open finalist, is looking for his first mixed doubles win at Wimbledon. The world No.73 lost in the opening round in his previous appearances in 2017 and 2018. The 32-year-old is partnering a 19-year-old American ranked No.35. This is also 31-year-old Rodionova’s second appearance in a Wimbledon mixed doubles draw and first since 2015. She is also aiming to record a first mixed doubles win at the tournament.

[WC] Nick Kyrgios (AUS)/Venus Williams (USA) v Austin Krajicek (USA)/Sabrina Santamaria (USA)
Mixed doubles, first round, Court TBA (not before 1am AEST)
Williams has only featured in two Grand Slam mixed doubles draws in the past 15 years, but happily accepted an invitation to partner Kyrgios. The 26-year-old Aussie can’t wait to play with the 41-year-old former world No.1, who made her first Wimbledon mixed doubles appearance 25 years ago. “She’s obviously a legend,” Kyrgios said. “I think it will be a bit of fun. I think we’re a bit of a danger pair as well if we serve well.”

Alex de Minaur (AUS)/Matt Reid (AUS) v [1] Mate Pavic (CRO)/Nikola Mektic (CRO)
Gentlemen’s doubles, second round, Court TBA (not before 2.30am AEST)
This is the fifth time close friends De Minaur and Reid have advanced to the second round at a major tournament together. Targeting a first third-round appearance, they’ll need to beat the top seeds. World No.1 Pavic and world No.3 Mektic have made nine tour-level finals so far this season, winning six of them. Being underdogs won’t stop De Minaur, who is ranked No.68, and No.90-ranked Reid from putting up a fight.