The Miami Open has been another demonstration of the healthy state of Australian tennis - and has the potential to inspire more great results from our players on the world stage. 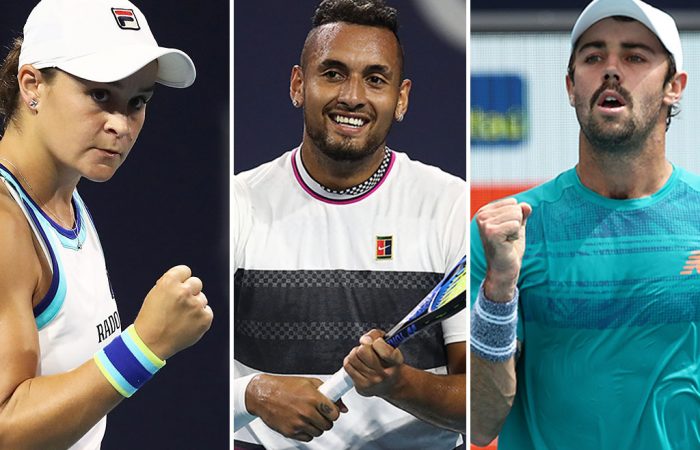 The Miami Open is the latest tournament to showcase the depth of talent within the Australian tennis ranks.

Following on from the Australian summer, during which Alex de Minaur won the Sydney International, Ash Barty advanced to the quarterfinals of the Australian Open and five Aussies appeared in the third round at Melbourne Park, the Miami Open has been perhaps even more successful from a green-and-gold perspective.

Barty is again the shining light, winning through the semifinals following an impressive win over world No.2 Petra Kvitova and as a result confirming her ascent into the world’s top 10.

She was supported by a cast of compatriots including Jordan Thompson and Nick Kyrgios, who both progressed to the fourth round, and Ajla Tomljanovic and Sam Stosur, who joined Barty in the third round of the women’s singles.

On top of that, Barty and Stosur have both won through to the doubles semifinals, ensuring Australian representation deep into the second week across multiple events in Miami.

It's been a stunning fortnight for Australia at the @MiamiOpen, and it continues – @ashbar96 and @bambamsam30 are both through to the doubles semifinals!

One more win each could see them face off in the #MiamiOpen final … pic.twitter.com/6ymnJ3GPB4

“Where one player can start to do well, and other players can hang on the coat-tails and go with them, it just creates a real positivity,” observes former Australian great Todd Woodbridge.

“There’s a healthy competitiveness of not wanting to let them (your countrymen) get in front of you, and you’re gonna go with them. That of course is what’s helped us get more players back into the top 100 and now we’re starting to edge them all into the 50s.

Woodbridge says the situation is a long way removed from two years ago, when Australia experienced one of its worst Wimbledon campaigns. Of the nine players who started in the first round of the men’s and women’s singles, just one progressed to the second round.

Yet at Australian Open 2019, 22 begun in the first round, 10 won their opening-round matches, and five advanced to the last 32.

“We’ve turned the corner since then (Wimbledon 2017), and we’ve had a group of players like Jordan Thompson, Alex de Minaur – who’s shown players in his age bracket, like Alexei Popyrin, what is possible – and Ash Barty come through,” Woodbridge said.

“Barty for me has been the constant over the last 12 months, and I think she’s led the way in what her peer group of Australians see is possible.”

Thompson, for one, came along in leaps and bounds this fortnight in Miami.

The 24-year-old Sydneysider had never before won a match at an ATP Masters event until 2019; after reaching the second round at Indian Wells and pushing eventual champion Dominic Thiem in two tight sets, he caught fire in Miami by beating two seeds – Karen Khachanov and Grigor Dimitrov – en route to the last 16.

Considering that last year Thompson never even played the main draw at a Masters event, won just one ATP tour-level match all season, and played predominantly on the Challenger circuit, this was a major breakthrough.

Woodbridge believes Thompson, after typically relying on his gritty defensive skills, has evolved as a player.

“On the ATP Tour he’s had to learn to cope with that extra intensity, better ball striking and facing players who, if you drop a ball short, will put you away. He’s known that, and he’s had to fight himself to take it on more,” Woodbridge said.

“The fact he’s beaten the players he has in Miami, he’s now saying: I belong in this space. And he’s probably gotten used to the intensity of the level required week in, week out. And that’s really important.”

It’s the emergence of players like Thompson – as well as John Millman and Matt Ebden, who developed into top-50 players in 2018 – which has ensured the spotlight is not shining as intensely on a player like Kyrgios. The strong performances of young guns like Barty, De Minaur, Popyrin and Kimberly Birrell at the Australian Open also meant different Australians were generating media coverage.

In this new environment, Kyrgios appears to have flourished, rediscovering the joy of competing on court in winning the recent title in Acapulco, and backing that up with a run to the second week in Miami.

He has won seven of his past nine matches and, after falling outside the top 70 in late February, is now back to the brink of the top 30.

“He’s got this ability now to be able to find a space to be able to go away, regroup, recharge. A couple of years ago, he didn’t have that – he was the great hope of Australian tennis and there was a lot of pressure on him,” Woodbridge said of Kyrgios.

“What these tournaments like Miami now do is dilute that pressure, because there are more players getting a headline out of the tournament.

“And that’s a healthy thing for all of Australian tennis.”